It seems the family moved down to Macclesfield from Oldham sometime between 1786 when John was born there, and the birth of his sister Sarah in 1793 at Macclesfield, Cheshire. Macclesfield is now in the county of Cheshire.

I have many DNA connections to the Mills families of Oldham.

John and Charlotte had ten children –

Around 1829 John, Charlotte and two of his surviving children (Joseph, William) immigrated to Toronto, Canada. Then after taking part in the 1837 rebellion there, according to the records below, he fled to Adrian, Michigan, USA.

He appears in a few documents – 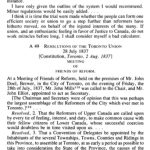 I haven’t yet been able to discover where and when John and Charlotte died.