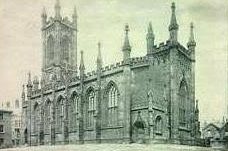 Rodger Milnes (Mills) was born in 1685 in the tiny village of Chadderton, 1 mile from Oldham, Lancashire to parents John and Dorothy Milnes.

Note the different surname Mills and Milnes. Apparently the old English word for a mill was ‘myln’, so when it is written in latin in the older registers, Mills was originally Milnes.

Rodger was baptised at the parish church of St Mary, Oldham on 5 April 1685.

Rodger’s father John Milnes was born around 1664 near Oldham but his parentage is unknown as there were quite a few John Milnes/Mills baptised in Oldham around this time (including baptisms with fathers – George 1662, Robert 1663, Adam 1664, etc).

I’ve been unable to find a marriage between Rodger’s parents – John and Dorothy.

On 8 May 1723 Rodger married Mary Sheppard at St Mary’s in Oldham. The parish register states ‘Rodger Mills of Chadderton, weaver and Mary Sheppard of Oldham, spinster.’

I haven’t been able to find a baptism for Mary in the area.

Chadderton was originally a community of farmers who supplemented their incomes by the hand loom weaving of fustian and silk.

Rodger and Mary had two children –

On his second son’s baptism, his address was recorded as Burnley Lane, Chadderton. 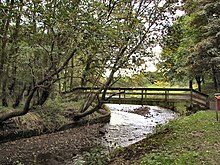 It is unknown when his wife Mary died.

There is also a burial recorded at St Marys, Oldham on 4 Sept 1726 of ‘old Rodger Mills, Chadderton’ so I’m not sure to whom this refers.