John Milnes was born around 1664 near Oldham in Lancashire, England.

His parentage is unknown as there were quite a few John Milnes/Mills baptised in Oldham around this time (including baptisms with fathers – George 1662, Robert 1663, Adam 1664, etc).

John married a local girl Dorothy around 1684, but a record of their marriage cannot be found.

John lived in the village of Chadderton, less than a mile from Oldham and had at least five children with Dorothy.

Only two of these children Roger b 1685 and Mary b 1690 have the mother’s name listed as Dorothy. The others have father John, mother’s name not mentioned.

Dorothy Milne died in January 1721 at Tonge Moor, near Middleton, Lancashire, only two miles from Chadderton (near Oldham). 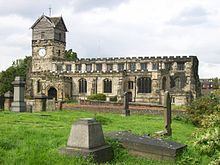 The parish register states she is the wife of John Milne. She was buried at St Leonards, Middleton on 16 January 1721.

Her husband John Milne died the same year at Tonge Moor in September 1721 and was buried at St Leonards, Middleton, Lancashire, England on 21 September 1721.