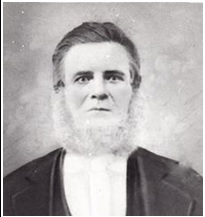 James Miles was born near Fetcham, Surrey, England in May 1821 and baptised 6 May 1821 at St Marys, Fetcham.

His father William was an agricultural labourer and James was the second born of twelve children.

At the time of the 1841 census James is aged 20, and living with his father William, and mother Charlotte, and seven siblings. The family are living in the Alms-house – charity housing in Great Bookham. 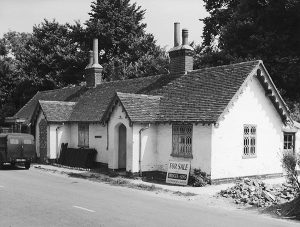 The original alms houses were near to the chalk pit on the Fetcham/Great Bookham border, with inhabitants allowed to sell chalk from the pit to help maintain themselves.

In the early 1800s, new alms houses were built at a time when the population of Fetcham numbered around 300.

James decided to leave the poverty of his family behind, and in 1846 can be found living on the outskirts of London. 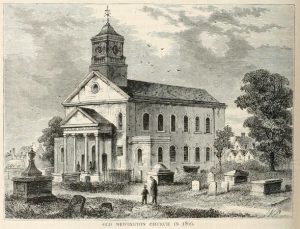 On 13 April 1846 he married Sarah Wyatt at St Mary Newington, Surrey. He was then living in Carter Street, and described himself as a gardener.

Sarah gave her address as East Street, Newington. Sarah was the daughter of John Wyatt (1793-1873) and Sarah Fisher (1787-1853). Sarah’s father John was also a gardener, so perhaps that’s how they met. Her father John married three times and she was one of seven children of John, by the second marriage.

James and Sarah had ten children – 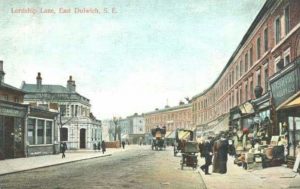 By the 1851 census the family were living in Lordship Lane, East Dulwich, Camberwell and James aged 30 was still working as a gardener.

Two years later the family decided to take their chances and immigrate to Australia. James may have seen this prospectus poster advertising for passengers to immigrate to the colonies. 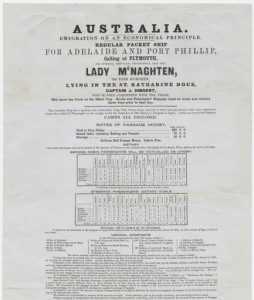 Prospectus of the immigrant ship “Lady McNaghten” in England

The family made the difficult decision to immigrate, and leave behind their native land, 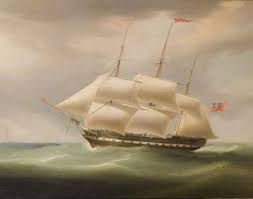 leaving England on 12 February 1853 and arrived in Melbourne, Australia on 23 May, aboard the advertised passenger ship ‘Lady McNaghten’.

Aboard were James and Sarah, and four children James, John, William Jasper and baby Mary Ann.

James was described as a farmer on the shipping list.

The family settled in Brighton, on the outskirts of Melbourne and their first child Joseph was born there the following year in 1854. From the births of the children we can ascertain the family moved around a little to Dandenong in 1859 and then finally to Cranbourne in 1861. 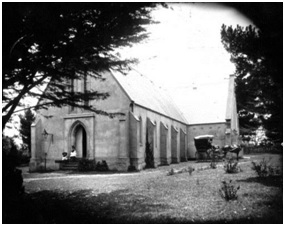 The next son Oliver was baptised in Cranbourne in February 1865, being one of the very first baptisms in the church. James Miles was included in a few men in May 1865 calling for a permanent minister for their newly built church. 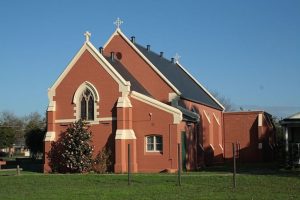 According to the South Bourke and Mornington Journal newspaper in December 1879, James was among a number of men that presented their heartful thanks to Mr Gason who was leaving their church of St John. James was treasurer of the church from 1894 to 1896 and was involved in forming the Temperance Society at St Johns in 1896.

In Australia, the temperance movement began in the mid-1830s, promoting moderation rather than total abstinence from alcohol. In the 1880s, a significant number of hotels around the country were built as or converted to coffee palaces, where no alcohol would be served. With the waning of the influence of the temperance movement, most of these hotels either applied for liquor licenses or were demolished.

James’ wife Sarah died on 16 January 1901 at their home in Cranbourne, of liver disease at the age of 78.

She left her estate to her sons Herbert & Oliver Miles. Unusual for the time Sarah acquired land CA 3 & 4 section 9 township of Cranbourne Vic. On 13 May 1884 (“in her own name with money of her own separate estate which she had prior to her marriage”).  Per affidavit of her servant Annie Payne Sarah was unable to sign her will due to her failing eye sight. She was unable to read or write for years past. 1901 Asset inventory – 3 roomed cottage on 1 acre of land situated in the township of Cranbourne valued at 120 pounds. CA 1 & 2, section 5 township of Cranbourne. 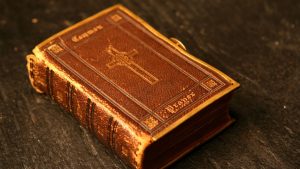 James was a well-known figure in town and in 1905 an article appeared in the Cranbourne newspaper, when the guardians of St Johns church presented James with a ‘handsome book of Common Prayer’ to commemorate his 87th birthday. He thanked them profusely and added that he supposed there were only two or three people that had been in Cranbourne longer than himself. 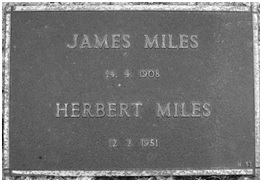 Headstone of James and Sarah Miles in Cranbourne Cemetery

Cranbourne Cemetery with his wife Sarah. A large obituary was printed in the Argus Newspaper on 22 April 1908. It stated he was one of the oldest members of the district, a patriarch, on the committee to build St Johns in 1864, and had been on the board of governance ever since. Mr Miles was stated to be an enthusiastic gardener, and a beautiful wreath was presented by the St Johns board of guardians, and a bunch of sweet violets was buried with him.

James photo and story appears in the book “100 years and more, the story of the founding and development of St John the Evangelist, Cranbourne”. 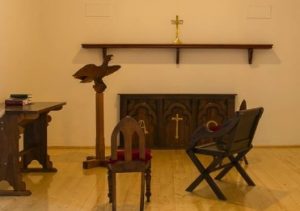 The carved lectern presented in memory of James Miles

A lectern, hand carved from a block of King Bulli pine on a column of silky oak was present to the St Johns church in Cranbourne in 1964 by Annie Moscript, the grand daughter of James’ daughter Mary Ann, in memory of James and Sarah Miles.