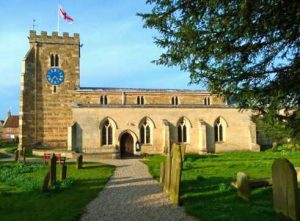 Ellen Register was a First Fleet convict, born in 1764 in Aldborough, Yorkshire, England. Sometimes the records state her name was Eleanor, and use the surname Register, sometimes Redchester (try saying Redchester quickly and you will see why).

Ellen’s mother Dorothy, daughter of Richard Simpson, wife of Robert had been also baptised in the same church on 10 June 1733, and buried there, aged 63, on 27 April 1796. Robert was also buried at St Andrews, Aldborough on 3 September 1794, aged 54. 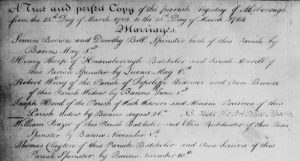 William and Ellen had a child together the following year –

William Frazer, son of William Frazer, born 1784, baptised 5 Dec 1784 at St Andrews, Aldborough, Yorkshire. I haven’t been able to find a burial for this William.

Unfortunately in 1787 at the age of 23, Ellen and William decided to steal some materials, probably to sell.

They were both arrested and tried at the Manchester Quarter Sessions in Jan 1787 for larceny. She was sentenced to seven years transportation. The trial calendar stated –

Ellen was described as a ‘singlewoman’ at trial so perhaps she tried to limit her attachment to William Frazer, to save either him or herself.

Ellen was originally transported in May 1787 on the “Prince of Wales” but it would seem that she was one of several woman who were shifted to alternate vessels whilst in the Cape of Good Hope.

Ellen completed her voyage to Australia on the convict transport ship the “Charlotte” arriving in Sydney on the First Fleet, on 22 January 1788.

William Frazer was also transported for his crime. When sending to Evan Nepaean a copy of the marriage register for William Frazer and Ellen Redchester, the gaoler at Lancaster Castle where they were held wrote that he had signed the contract for Frazer’s removal and had sent him with the other convicts for embarkation. This is the only record of Frazer’s going except for his name on the contractors muster. He doesn’t appear on any shipping register.

William Frazer is first mentioned in Australia on the victualling list dated 17 November 1787 with his wife Ellen. Only the names of their ships vary.

William appears working as a “blacksmith, noted for his surely temper and heavy drinking. On 5 January he received 25 of 100 lashes ordered for insolence (“You may kiss my arse”) to Seargeant Martin Connor when he refused to move more than two paces from the marine lines. On 23 June he was sentenced to work in irons for a month for another incident of drunken insolence”.

“He was employed as a blacksmith in the early days of the colony, and was a favourite of Captain Tench and Governor Phillip, who once asked Frazer to examine some locks that Phillip had especially imported for the Public Store. Frazer reportedly asked for a crooked nail and in an instant picked the locks.”

When he died on 13 June 1791, Collins wrote that “Frazer was an excellent workman, and was supposed to have brought on an untimely end by hard drinking, as he seldom chose to accept any article but spirits in payment for work done in his extra hours”. Captain Tench regretted that “had not his villiany been still more superior then his skill, he would have proved an invaluable possession to a new country”.  (1788 The People of the First Fleet by Don Chapman).

Ellen formed a marriage relationship with William Morgan a private in the NSW corps, he had come to the colony in the Second Fleet to Australia, aboard the ship “Neptune”.

A marriage record cannot be found for the couple, but they do baptise their children in the Anglican Church at St Phillips, Sydney and at St Johns at Parramatta.

Ellen was granted 20 acres of land on 20 February 1804 at Concord, NSW. Close by was the new land grant farm of Mr William Morgan. She obtained another grant of 20 acres on 22 July 1805 also at Concord. She is believed to be the first woman to hold land in the colony of Australia.

On 27 August 1826 an Ellen Frazer is recorded in the Sydney Gaol Description and Entrance Books under Ellen Frazer, Ship ‘Mary’ General Sessions, Sydney, crime absenting from service, 3rd class at the factory, one month, Sept 10 1826. This is the wrong ship, so not sure if this record is for her.

Her death notice states “At her residence at Concord, on Wednesday the 18th instant, Mrs. Eleanor Frazer, aged 83 years. Mrs. Frazer was a “first fleeter”, having arrived on the formation of the colony. Her intellect was unimpaired to the last, and she had a perfect recollection of the “first deeds” in New South Wales.

She remembered Commodore de La Perouse, and used to describe the dress worn by the persons forming the expedition under his command. Her remains were interred with those of her eldest son John (who was the second person born in the colony) in Liverpool Church-yard, to which place the corpse was followed by a long train of children, grand and great grand children, belonging to the deceased.” (The Australian Newspaper Sydney Tuesday 24 Nov 1840 p. 3).

She was buried 20 Nov 1840 at St Lukes Liverpool NSW, as Eleanor Fraser.

In her will she bequeathed her 20 acres of land each to her two sons William Frazer Morgan and Richard Frazer Morgan. There was also provision made in her will for Mr Thomas Humphries, a carpenter.

What a life she led!