James Toft was born on 1 March 1768, in England, according to his convict records.

I’ve been unable to narrow down his baptism and parents and prove a definite connection as there are several James Toft baptisms around this time and his subsequent documents give no clue to his birthplace.

James was married by license to Elizabeth Mobbs on 4 April 1792 at St James, Westminster, London, England. He gave his residence as the parish of St Marylebone on his marriage allegation bond. 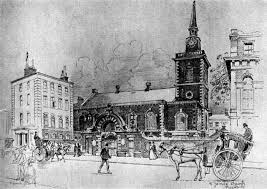 She was baptised on 24 November 1771 at St James, Westminster, London, England.

Elizabeth’s father Thomas Mobbs died in January 1793 at Covent Garden, so it was obviously her home parish that her first son was born in.

I also have a copy of a letter written by Zilla Atkin (1868-1948) written in July 1933, who was the granddaughter of Elizabeth Toft (1801-1879), by her daughter Margaret Mitchell (1836-1922). In the letter she talks about her mother’s grandfather (James Toft)  dying on the way out to Australia and her great grandmother Elizabeth Mobbs working with Governor Macquarie’s wife (as a servant), and then moving down to Minto to marry William Mannix, etc.

Unusually I’ve been unable to find any of the children’s baptisms except for the firstborn son James in Covent Garden, Westminster in 1793.

There is a family James Toft and Elizabeth Mitchell with children baptised in Rudgwick, Sussex – Sarah 1805, George 1797, William 1799, Elizabeth 1802 and Ann 1804, but I don’t believe this is the correct family. This other family appears in the 1851 census (long after ours have gone to Australia).

Death certificates for Sarah Toft (born 1807 London) and her sister Elizabeth Toft’s (1801 London) both say they were born in London (not Sussex). I can find no baptism for Mary Ann.

In 1793 James appears in the Westminster Rate books for King Street North, St Paul, Covent Garden. This James is most likely the father of James b 1793 who I believe is the brother of our Mary Ann Toft. 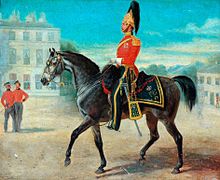 James junior b 1793 served in the 21st Dragoon Guards, and appears in the Canada, British Regimental Registers of Service 1756-1900.

The regiment was raised a third time in 1794 in the north of England when it was also known as the Yorkshire Light Dragoons, served in Ireland during the Napoleonic Wars and was disbanded in Chatham in 1819.

The exercise of converting from “Horse” (heavy cavalry) to “Dragoon” (formerly mounted infantry) was intended to save money—Dragoons were paid less than Horse—and the change was very unpopular among the regiments affected. To compensate for the fall in salary and status, the impressive sounding title of “Dragoon Guards” was adopted.

James stated birthdate is 1795, and place was given as St James, Middlesex. He is 18 years old. The records state he is 5 ft 6 1/4 tall, and he enlisted on 12 Oct 1813. He had a fair complexion, fair hair, grey eyes, his trade was a clerk, and he was born in the parish of St James, Westminster. (James’ parents James and Elizabeth Mobbs were married in the parish of St James). 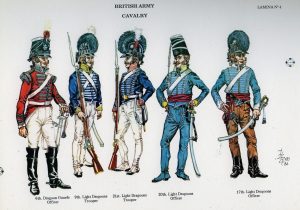 On 15 June 1819 James appears again in the 21st Dragoons List of Staff of Non Commissioned Officers. He now has a rank of P.M.S.  It is unknown if he returned to England.

Back to James Toft and his wife Elizabeth Mobbs –

In 1803 a James Toft  appears in the London Tax Records for Walworth Common, Walworth, Surrey. (Later his friends from Walworth would provide character references for him in his plea for mercy against his sentence).

Unfortunately, James got himself into some financial trouble and decided to help himself to his employers money without permission, and on 26 January 1813 was indicted for embezzlement.

James was working as a clerk, one of many, to Thomas Hankin, being employed to sell flour, and handle money and valuable securities on his behalf. James worked in his accompting-house at 186 Bishopsgate, London. (petition for clemency) 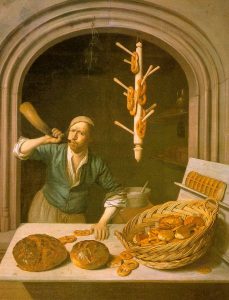 James was to sell and receive payment for flour from bakers but he had been failing to account to his employer for the payments of some customers and when his employer became suspicious of him on one Friday’s accounting day over one particular customer, James admitted to having embezzled a large amount of money and having to settle his account to £320, begging the employer to let him stand it over till the Monday.  He would not.

In the trial it was stated that James firstly stole 21 pounds. A Mr Thomas Easton, baker of Bermondsey Street, came forward to state he paid James 21 pounds for some flour, part of the 50 pound debt that was owned to Mr Hankin. Apparently he was not the only customer James stole money from.

When confronted James admitted his embezzlement, and asked his employer to ‘let it stand’ until Monday and we settle the amount of 320 pounds, the sum of Mr Easton’s being part of it.

Despite a witness being called in his defence to give a good character reference, the jury handed down the verdict of GUILTY, and sentenced James to be transported for fourteen years. 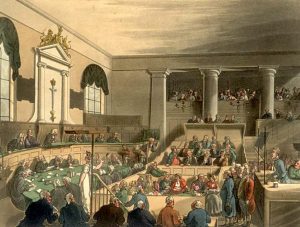 His trial was held at the Old Bailey London on 29 March 1813. You can read the trial online here.

James appears in the England and Wales Criminal Registers for 1813.

It states he is 45 years old, born in 1768, tried at Middlesex on 9 April 1813, crime embezzlement, sentenced to transportation 14 years.

In June 1813 James Toft petitioned the Home Office for mercy on his sentence of transportation. Two petitions were received on his behalf from the prosecutor and trial jury, and also from 8 people of Cheapside and Walworth, Surrey. (remember that tax record from Walworth!).

The grounds for clemency presented were that the prisoner was of previous good character, he had acknowledge his crime and reimbursed Thomas Hankin. He states that his wife and seven children are a burden on parochial relief and the Common Sergeant overruled the recommendation for leniency at the trial. 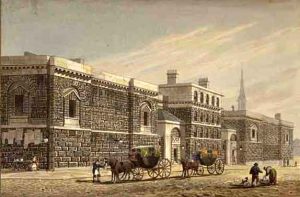 Unfortunately for James, the court responded that because of his multiple instances of committing embezzlement, there would be no pardon. (National Archives HO 47/52/4).

James was kept at Newgate Prison for a month, and then transferred to a Prison Hulk named the “Portland” in Portsmouth, Hampshire, England on 14 May 1813.

Prison hulks were decommissioned warships, stripped of their masts, rigging and sails. Hulks were moored up along the Thames and Medway estuaries, as well as at Portsmouth, Bermuda and Gibraltar.

In these locations, the work of convicts increased the efficiency of dockyards.  Convicts provided a cheap and efficient workforce, and rather than build new barracks to house men, prison hulks could be acquired at little cost and towed from site to site. 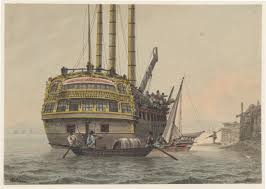 In May and in August 1813 James is recorded separately aboard the Prison Hulk Portland on the Prison Registers.

It states he was transferred there from Newgate Prison, and has been given clothing rations of  a jacket, waistcoat, breeches, shoes, shirt, stockings, hat, handkerchief, bedding, blanket and irons. (National Archives UK T38 / 327).

He also appears on another Prison Hulk register for the “Perseus”, so may have been transferred. This register states he will be transferred to the Convict Transportation Ship the “General Hewett” to take him to Sydney, Australia for 14 years. 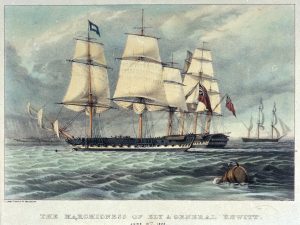 The “General Hewett” departed England in August 1813, arriving in Syd

ney on 7 February 1814. There were 300 convicts packed in to very tight, deplorable conditions.

Unfortunately James died onboard of dysentery at Rio Di Janiro on 17 October 1813, two months into the General Hewitt’s voyage to Australia, one of 34 convicts dying en-route.

The convicts were poorly looked after, suffering from dysentery and typhoid, having their salt ration bought from them by the captain and having their wet bedding tossed over board, leaving them nothing in the cold weather.

His wife, Elizabeth, nee Mobbs, had set off to Australia as a free passenger on the “Broxbournebury” to join him, six months after his departure, with their four daughters – Mary Ann, Elizabeth, Ann and Sarah.

Elizabeth and her girls were placed on government charity and registered as such in the NSW 1814 population muster where they were living in Windsor, New South Wales. She is described as a widow living on charity with four children. 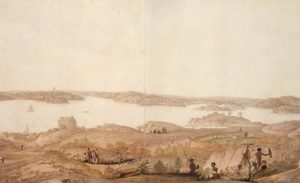 In 1816 she lived with her family, as a housekeeper to Mr William Mannix, in a hut near Cockle Bay, Sydney. Cockle Bay is one of the bays in Darling Harbour, which opens into the much larger Sydney Harbour.

The first settlers used the water and clay around Sydney to make a start on the colony’s first buildings, until they could find a suitable site for brick-making. Brick-making required a plentiful supply of clay and a ready source of fresh water. Approximately a mile from the settlement, at the head of a long cove, a suitable site for brick-making was located. This site was later named Cockle Bay, and still later, Darling Harbour.

William Mannix had arrived on the “Elizabeth” on 6 August 1806 as a free settler.

On 1st January 1810 he was leased 21 acres of land at Cockle Bay, Sydney by Governor Macquarie for twenty shillings per year.

On 25 August 1812 William was leasing 400 acres of land per a land grant at Upper Minto for 8 shillings per year.

In November 1816 Mr William Mannix was selling by auction the property at Cockle Bay, including a coal wharf and dwelling house. (Sydney Gazette 2 Nov 1816).

William Mannix appears on the 1819 NSW Land and Stock, Census and Population books. He is farming wheat, maize, barley, oats, potatoes and other crops, and has 43 cattle and 35 sheep.

In the 1822 NSW Muster she was still living with William Mannix, and is raising their two daughters, Elizabeth aged 6 and Jane aged 8. She is described as “Mrs Elizabeth Mannix”, but she did not officially marry him until 1835 when she was about 55 years old.

In the 1823 population books for NSW she is described as living in Molles Main, Minto, NSW. She is listed with her daughter Sarah, Elizabeth and Ann who are described as ‘came free’ on the Broxenbury. Even all four of them are listed under Toft, there is a notation saying they are daughters to Mrs Mannix. 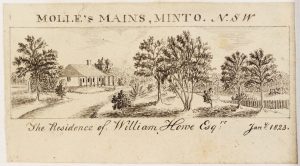 “Molles Main” was a large estate of 1550 acres on the cow pasture road that William Howe leased from George Molle,as shown in the 1822 Land and Stock muster at Minto.

The early petty sessions was also held there prior to the court moving to Cawdor in 1825, which was then transferred to the township of Camden on 10 August 1841.

In October 1823 William Mannix appears in the Sydney Gazette giving evidence about three of his convict assigned servants, Gorman, Ward and Rowd that were accused of theft and the murder of Minto settler Mr William Wells. Mr Mannix’s farm was mentioned as being as at Spring Hill farm, Minto.

In the 1825 NSW muster, Elizabeth Mannix is still living with William with their daughters Elizabeth aged 8 and Jane aged 10.

In 1834 William Mannix is mentioned in the Government Gazette, as occupying land, leased to him for 21 years by Governor Macquarie, at the east side of Darling Harbour, formerly called Cockle Bay.  There are many land transactions and mentions of William in the Sydney papers over the years. (Trove).

In December 1835 Mr William Mannix, of Campbelltown, purchased land in the town of Merrimba, NSW (section 3, allotment 4) from Sir Robert Bourke for one peppercorn.

Elizabeth is named on a Land Grant Memorial on 22 June 1837 at Upper Minto, New South Wales. 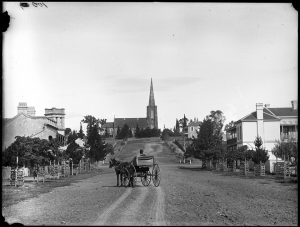 Her husband William Mannix died in 1846 aged 68 years at Narellan. He is buried at St Thomas, Narellan.

Elizabeth then lived near or with her daughter Jane, and died around the same time as her on 24 May 1850 at Paddys River, New South Wales. She was buried at All Saints, Camden, Narellan on 26 May 1850.  Jane died in February 1850 at Paddys River. Jane was described on the burial records as the wife of Willoughby, Beadman.