The Jackson family farmed in the same area for many generations. Lawrence / Laurence was the fourth of eleven children born to John and Sarah. John who died in 1886 and Sarah who died in 1879, are buried in the Oswaldtwistle, Lancashire cemetery.

From a young age Lawrence worked on his father’s farm, with his brothers John and Richard. He was still working there in 1871 as a 21 year old, but in 1876 decided to leave his farm, village and country, and immigrate to Australia. As yet, he hasn’t been found on any immigrant ships passenger lists, but on his marriage certificate in 1879 in Fitzroy, he states he immigrated in 1876.

He settled in Melbourne’s Fitzroy and married local girl Mahalia Mead at St Marks in Fitzroy in April 1879. Later that same year their first child Robert was born. In 1880 he is livi

ng in a two roomed wooden house in Groom Street. Lawrence lived in various houses in Fitzroy at 1881-1885 Tranmere St, but by 1890 was living at 138 Princes Street, Carlton (according to his address in his uncle Robert Jackson’s probate papers).

His occupation is always given as a labourer.

Lawrence and Mahalia had five children – Robert in 1879, Sarah in 1881, twin boys Albert & Arthur in 1883, and twin girls Lily and Mahalia in 1885. Sadly his wife Mahalia died in childbirth with the twin girls, and the twin girls lived for only days after.

The children were farmed out to friends and family members –One twin Arthur aged 2 and older brother Robert Jackson aged 4 were raised by their mother’s sister Elizabeth Mead and her English born husband Ernest Pateman, a cigar maker. The family immigrated to New Zealand in 1898, for him to become Manager of a Cigar Factory in Auckland.

Other twin Albert was brought up by Fitzroy friends Esther and Charles Wentworth.

Sarah Jackson was sent to live with her aunties Esther (Tilly), Frances (Fanny) and Martha (Dolly) – mother Mahalia’s spinster sisters. Sarah died aged only 10 of diphtheria, and it seems by the following newspaper notice in the Melbourne Argus, that Lawrence was still very much in touch with his daughter.

After the death of his daughter Lawrence appears to have cut all ties with his family, and his son Albert, the only child remaining in Australia, never had any contact with his father again.

In 1908 Lawrence, at the age of 58, married again to Margaret McCann. They lived in Whitehorn Road in Balwyn (electoral roll).

In 1911 Lawrence was back in Fitzroy at 82 Fitzroy Street (pictured), and following year moved to 49 Roden St, West Melbourne. He stayed there for 4 years before moving to 15 Blackwood Street, North Melbourne in 1916 where he died on Christmas Day 1916. Lawrence is buried in the Coburg Cemetery (no headstone). They had no children.

In 1917 his wife Margaret, in a touching tribute to her husband had a window depicting the name ‘Lawrence’ inserted in the window of her new address at 17 Grattan St, Carlton. It is still there today. 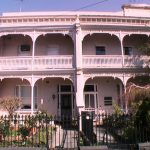 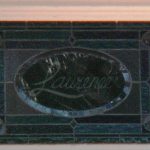 Margaret was born in Avoca in 1859. After her husband’s death in 1916, she remarried Emile Aubrey Austin in 1919 at St Marys, North Melbourne.

Emile came out from England aboard the passenger ship “Barambah” in December 1918. He was suffering from very severe bronchitis, and was sent out to Australia (Australia Munitions War Worker Scheme) by the British army for repatriation after his work in England.

Margaret and Emile had no children.

Margaret died in September 1947, aged 88. Margaret is buried in the Melbourne General Cemetery, with her husband Emile (d 1928) and his parents Edgar & Jane Austin.