Thomas Ridgely/Ridgley was born around 1738 in Dublin, Ireland.

Thomas Ridgely appears in a List of Protestant Families in the Monkstown parish of Dublin on 5 March 1766.

Monkstown is a suburb in south Dublin, situated on the coast between Black Rock and Dunleary.

Thomas Ridgely married twice, firstly to Honory who it appears died in childbirth with daughter Honour in 1782. Daughter Honour was baptised at Monkstown Church of Ireland on 24 May 1782.

Thomas then married Sarah soon afterwards. They were living in Dunleary at the time of the next two children’s baptisms – 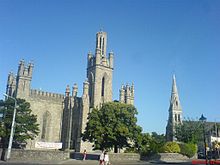 Thomas (senior) died on 12 May 1787 in Booterstown, Dublin, mentioning only his son Thomas in his will which was written seven years before on 11 May 1780. 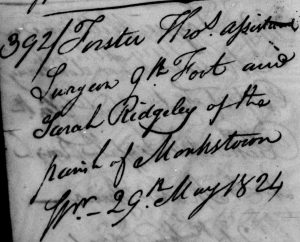 His widow Sarah married again in 1804 in Dublin to army surgeon Thomas Forster of the 9th Foot.

In 1812 Thomas Forster was mentioned in the Belfast Commercial Chronicle – 1st Regiment of Foot— Surgeon Thomas Forster, from the 9th Foot, to be Surgeon.

Thomas Forster died in Monkstown on 29 May 1824, in Monkstown, Dublin. I haven’t been able to find the death of Sarah Forster, nee Ridgely (maiden name unknown).