William Elrington and Isabel and Dorothy

William Elrington was born in Healey, Northumberland, England to father Ralph Elrington, according to the baptism registers. 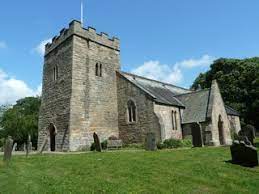 William was baptised on 28 May 1665 at St Peters, Bywell, Northumberland. Just his father’s name appears on the register.

Healey is a small agricultural township in the parish of St Peters Bywell. It lies 7 miles from Hexham, and in 1848 the population was just 65 people.

It is believed that William was a yeoman farmer in the Healey district in the parish of Bywell. Two of his sons left wills and they were both yeoman.

At the age of about 29 William married Isabel, surname unknown near Bywell around 1694. There is a marriage transcribed as William Newton married Isabel Brown on 6 September 1700 which may be the correct one? 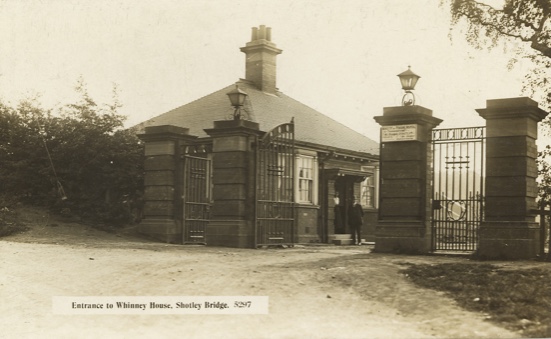 William’s first wife Isabel died, perhaps in childbirth with her last child, and then Robert married again, this time to Dorothy. William and Dorothy had – 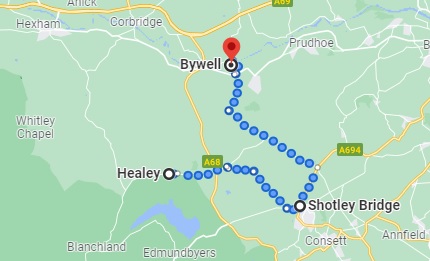 *children mentioned in their father’s will.

Judging by the baptism and burial records for William’s 13 children by two wives, William lived on the four different estates (possibly very close to each other).

There is a 1691 Property Deed – Parties: George Delaval, John Shaftoe of Little Bavington esq., and John Errington of Healey esq to Robert Bewick of Close House. Bond in £400 for payment of £200. Ref 1DE/1/190 at Northumberland Archives.  Not sure if this is the same ‘Close House’ but worth noting.

There is a will on the North East Inheritance Database for Thomas Atkinson, yeoman of Whinny House dated 1719, which mentioned his wife and daughters.

Whinney House freehold estate was sold in 1743 while in the occupation of tenant Mr Joseph Cabry, and the following advertisement appeared in the newspaper advertising its sale. 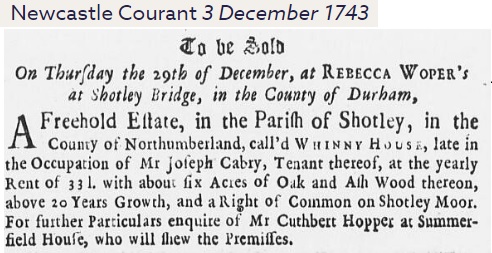 The same year, William wrote a will dated 12 August 1743 stating he was infirm in body, but perfect in mind and memory giving his address as Whinns, parish of St Peters, Bywell.  He left bequests to – his wife Dorothy, and to his three children William, Jacob and Mary Ellerington. He also mentions other children, Robert, John, Jane Calley, Mary Maudlin, and Mary Ellerington.

William, despite being infirm lived for another 5 years after writing his will and died on 12 January 1748 and was buried at St Peters, Bywell.

A much younger second wife Dorothy died on 1 April 1766 at nearby High Fotherley.

Their headstone at St Peters, Bywell reads the following – 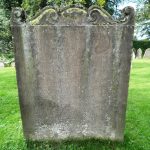