Click on any link below to open an article… 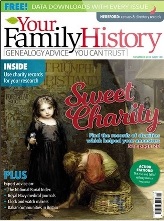 East of London “Cockney Ancestor” Magazine
Why Did They Immigrate, November 2008
Doctors and Gunmakers in the East End, January 2012

English “Family Tree” Magazine
The Heirloom that Found Me, June 2010

Other Contributions
Australian Medical Pioneers Index – Dr Samson Davis
Diary of Dr Samson Davis, 1842 (transcribed) on his return voyage to see his brother in New York, USA. He returned to England a year later, before immigrating to Australia in 1852.