Denis (Dennis) Cullinan was born in the parish of Ruan, County Clare, Ireland, most likely in the townland of Killeen.

According to his death certificate his parents were Andrew Cullinan and Catherine Fogarty.

Andrew was a farmer of small acreage in Killeen, in the Roman Catholic parish of Ruan. Click on his name to read more.

Denis most likely worked on his father’s farm, and met and married local girl Alice McMahon on May 1854 at the Roman Catholic Parish Church of St Marys, Ruan, Clare, Ireland. 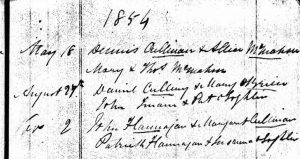 Their witnesses were Alice’s parents’ Thomas McMahon and Mary Collins.

Alice was born around 1828, and in 1846 her father Thomas McMahon was farming at nearby Kilmakenis, in the parish of Ruan. (Tithe Applotment Books).

The name Ruan comes from the old Irish name for the Alder tree, Ruadhan. The bark of the alder was used in olden times to dye wool red. Writing in 1807 Samuel Lewis tells us that Ruan was the site of one of the principal sheep fairs in the county. 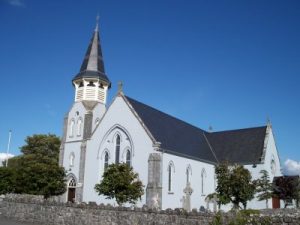 The old church’s roof was slated in 1834, but by the turn of the century it was falling into disrepair and was replaced by a new church 1910. Ruins of the old church dating from the 15th century can be seen in the church graveyard and measures 55ft by 9 ½ ft.  A later building project from the church and has the following inscription: “This chapel and tomb were erected by Donnach O’Kerine, the son of Dermot O’Kerine of Owan for him and his posterities in the year of Our Lord God 1688”.

Denis and Alice had their first daughter Elizabeth (a few months after their marriage) in 1855, and she was baptised at the same Catholic Church in Ruan on 18 February 1855. Ruan Catholic baptisms can be found here.

Times were very difficult in Ireland due to the potato famine, and harsh economic conditions, and many families decided to leave their familiar homelands and travel to a new country in the hopes of improving their situation. 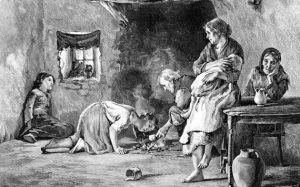 In the 1820s quite a number of free settlers, from Clare with capital entered Australia. They were mostly the sons of landlords, of merchant and professional classes. For £1,000 one could purchase more than 2,000 acres of good land.

They needed shepherds, stockmen, ploughmen, artisans, miners and they in turn came from amongst evicted tenants and others as ‘indentured’ labourers, whose passages were mostly paid for.

‘Improving’ landlords such as Col. Wyndham offered free passage to tenants and their families to emigrate to Australia. Many families availed of the offer; the only alternative was eviction. The Poor Law was enacted in 1838 and the county was divided into Poor Law Unions each administered by a Board of Guardians, such as the one in Corofin, in use in 1850.

Most of the inmates were evicted tenants and orphans and others left destitute by the Great Famine. The Boards of Guardians discovered that it was cheaper to pay the passage to Australia for an able-bodied inmate than to maintain him in the workhouse and very many of those in receipt of poor law aid availed of such offers.

The Gold Rush of the 1850s brought thousands of emigrants almost overnight into Victoria. In the year 1856, 278 emigrants from Clare arrived on assisted passages into Victoria; Tipperary was next with 206 emigrants and it is remarkable that all Leinster including Dublin City only provided 222. Large concentrations of Clare people settled at Ballarat and Bendigo. (Source: Clare Heritage and Genealogy Centre).

Denis, wife Alice and baby Elizabeth immigrated to Australia leaving the port of Liverpool on 10 June 1858 and arriving in Melbourne on 15 September 1858 aboard the “Conway”. They were assisted immigrants.

The term ‘assisted immigrant’ refers to those people whose passage was subsidised or paid for through one of the several assisted immigration schemes which operated from the United Kingdom to Australia. 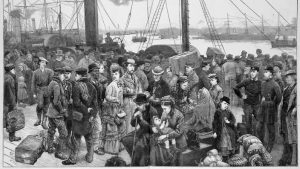 Denis’ occupation was given as a agricultural labourer from Ireland, aged about 40.

The family first lived in or near the town of Kyneton, Victoria and the children were baptised at the Roman Catholic Church in Kyneton (all excepting Elizabeth who was baptised in Ruan, Clare, Ireland before they immigrated). 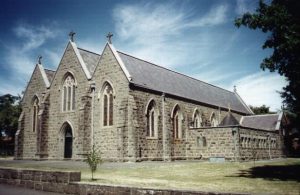 The town of Kyneton, gateway to the goldfields,  was mainly established in the early 1850s. Slab huts and tents were situated close to Piper St and the river and were occupied by workers from nearby runs and their families.

Gold was discovered in nearby Castlemaine and Bendigo in 1851, and Kyneton’s population grew rapidly from the 300 of the census of March 1852, to 2000 in October of the same year. Kyneton became a very important centre with stores and businesses providing food, services, supplies and commerce for those moving to and from the goldfields.

Denis and Alice had seven children, the firstborn of course arriving with them from Ireland. A DNA connection has been proved with a descendant of daughters Elizabeth and Frances. 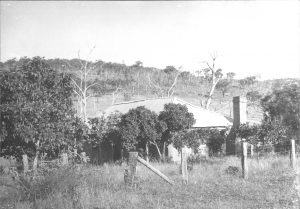 1.  Elizabeth born 1855 Ruan, Clare, Ireland. Married London born George Davis in January 1879 in Fitzroy and they selected “Woodvale” in Boho, near Benalla, Victoria in 1879. Their first child was born near there in Violet Town.

They had eight children. Elizabeth died in 1926 in Northcote, and George in 1934.

2. Mary born 1859 Kyneton, Victoria, Australia. I did find evidence of a Mary Cullinan buying land up in Boho in 1888 where Elizabeth was living from 1879, but am yet to prove if it is the same Mary Cullinan. I’m not sure if Mary married, or where she died. Can’t find a death of a Mary with father Denis Cullinan that match ours.

3. Andrew born 1860 Clowes Forest, Tylden South. Clowes Forest gold diggings comprised about 400 miners in 1860. There was a court case at Kyneton in 1885 – Kyneton County Court – Mary Cullinan v Andrew Cullinan, claim for 46 pounds. No appearance of either party and the case was struck out. (Kyneton Observer Tues 5 May 1885). So it appears these two siblings didn’t have a great relationship. Andrew, a labourer, married Alice Matheson in 1883 in Trentham. They had children – Francis Angus born 1884, Thomas Andrew 1886, Martin Denis 1888, Alice Mary 1890 and Nellie 1897.

Andrew, a labourer,  lived at 51 Nicholson St, South Yarra with his wife Alice and two children Francis Angus and Martin Denis in 1915. Alice was arrested for cattle stealing in 1895 at Oakleigh (case was dismissed) and was a railway gatekeeper. She died in 1940 in Newmarket, and Andrew died in 1937 at “Nazareth House” (aged care and invalid home) East Camberwell.

Son Andrew was born in Clowes Forest, a gold diggings area that comprised about 400 miners in 1860. Denis, with his farming skills, may have tried his luck at mining, or was involved labouring in the timber industry. 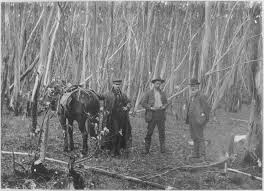 Timber cutters on the Victorian goldfields

In 1856 a group of wood splitters, commenced their work among the timber in the ranges, where they lived in huts. The timber was sent to Kyneton to be sold.

This forest known as “Clowes Forest,” proved to have immense quantities of valuable timber in it. The timber was used  for building houses and bridges and fencing in the area.

In 1859 gold was found in the vicinity of Clowes Forest or Ogdens Forest (Ogdens Inn being the first in the area). The diggings were part of a band of gold-bearing country which extended south across the dividing range through Newbury, Barrys Reef and Blackwood.

It appears the family moved to Tylden in 1863 where their next child Catherine was born.

Denis soon found himself in and out of the Tylden Petty Sessions Court in various minor local skirmishes. 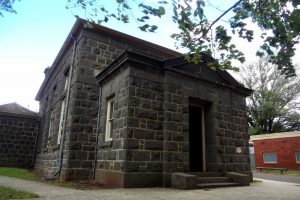 On 2nd September 1871 Denis was charged with being in possession of meat for which he could not legally account.

He appeared in the Kyneton Courthouse to answer the charge on Friday, 1st September 1871.

The case made the newspapers, but he was discharged due to no evidence being presented. 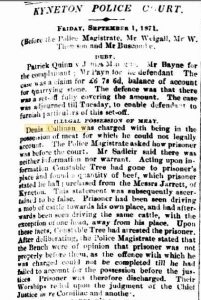 Denis’ last child Michael was born in Trentham in 1873.

Denis was admitted to the Kyneton Hospital on 13 February 1880 with bronchitis, and was described as a labourer, born in Ireland, aged 48, Roman Catholic. He died there on 25 February 1880 of cancer of the stomach.

Denis is buried in the Tylden Cemetery, (Grave 286 Section 9 Compartment 184), with no headstone, and in the burial register is described as a farmer of East Trentham.

His wife Alice was also admitted to the Kyneton hospital in September 1880. The records state she was aged 45, married, born in Ireland, Catholic, suffering from atonic dyspepsia (no appetite, not eating, nausea). She recovered, and moved to Smythesdale, near Ballarat.

She died on 25 August 1903 aged 75 at the residence of her daughter Frances Sharp in Newtown, aged 75. She is buried in the nearby Smythesdale Cemetery. 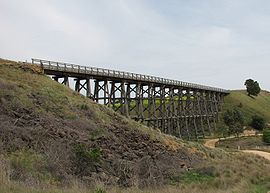