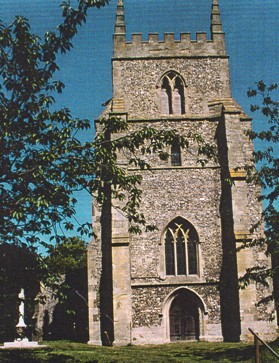 Robert was baptised at the parish church of St Peter and St Paul in Aston Rowant on 8 September 1676. The parish register is written in latin.

The family appear to be fairly well off, and his father Robert senior is always described as a gentleman in the records.

At the age of 27 Robert junior married Martha Smith on 8 April 1703 at the parish church in Emmington, Oxfordshire.

The couple married by license (Calendar of Marriage Licenses issued by the Faculty Offices 1632-1714), and on that document stated that Robert was of Kingston Under the Hills, a widower and Martha Smith was of Emmington, a spinster. Her mother gave her consent as her father had died.

Given that Robert describes himself as a widower, he must have been married before, but I’ve been unable to find another marriage for him yet in either the parish registers or the Marriage Licenses issued by the Faculty Office indexes.

Martha Smith was born in Chinnor and baptised there on 26 June 1697.

Martha was the daughter of William Smith (Guilielmi in latin).

Martha wrote a will on 1 March 1742, describing herself as a widow in Aston Rowant, weak in body, etc.

Her bequests were as follows –

Catherine and Susan Littlepage were made joint executrices. Witnesses to the will were Anne Clerke, Samuel Wheeler and Matthew Harves.

The will of Martha Littlepage was proved on 26 April 1745 and is available online at the Oxfordshire Family History Society. Martha made her mark and seal at the bottom of the will.