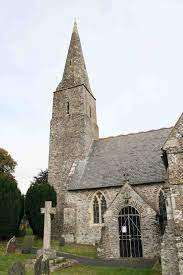 Charles was baptised on 21 March 1691 at St Marys, Sheviock, Cornwall.

Charles was one of twelve children born to the couple. His father Nicholas was the vicar at Sheviock from 1680 to 1740.

The village of Sheviock (sometimes spelt Sheviocke) is a  mile from the sea, just 3 miles east of St Germans, in the diocese of Truro. The villages of Crafthole and Portwrinkle, a fishing port where pilchards was the main industry are nearby.

Charles’ father Nicholas inherited the family arms  which are described as – 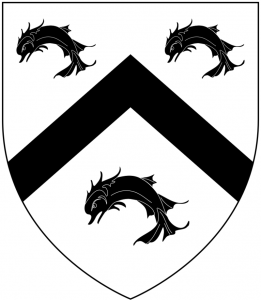 At the somewhat late age of 31 years, Charles married Elizabeth Northmore, a wealthy widow on 20 November 1722 at St Peters Cathedral in Exeter, Devon.

Elizabeth married Edward Herle at the age of 18 years on 7 February 1713 in Throwleigh, Devon and their son Northmore Herle was born in 1715. A daughter Elizabeth was born in 1717, but died soon after birth.  Northmore matriculated from Queens College, Oxford University in 1733 and also appears in the Oxford Alumni listings as the son of Edward Herle of Lazant, Cornwall.

Northmore died at the young age of just 22 years in Oxford in 1737. The PCC will of Northmore Herle, esquire of Landew, Cornwall appears on Ancestry and his extensive estate was bequeathed to his mother Elizabeth and stepfather Nicholas Kendall.

Elizabeth’s first husband Edward Herle was a wealthy landowner in Landue, Lezanat and Prideaux in Cornwall. He was a British Parliamentarian from 1713-1721, Sheriff of Cornwall, educated at Oxford, and died in April 1721 at Lezant, Cornwall aged 39 years. His only son Northmore inherited his estate.

According to the Launceston Then website Edward Herle lived at Landue House, Lezant in Cornwall, after inheriting it from his father’s line – Edward Herle & Mary Trefausis (his grandparents, then from Nicholas Herle and Elizabeth Reed (his parents).

“He finished the building of the mansion (Laundue House) and was M.P. for Launceston. He died in 1721, leaving an only son, Northmore Herle, who died in 1737, soon after he attained his majority, and devised his property to his six half-sisters, the daughters of Dr Charles Kendall, who had inter-married with his mother.

Of the daughters of Dr Kendall, Elizabeth married in 1740, Adam Pierce, of Exeter; and Charlotte, in 1753, Humphry Lawrence, of Launceston; and in 1806 the sons of these ladies sold Landue to Mr William Bant, whose daughters sold it about the year 1820, to Thomas John Phillipps. He remodelled the medieval hall in an antiquarian style with oak panelling, a Gothic chimneypiece and strapwork ceiling decorated with his arms and those of other families who held the estate.” (Launceston Then website).

Charlotte’s husband Humphrey Lawrence was a wealthy aristocrat of whom four generations of his family (including his own) are celebrated by the insertion of a stained glass window in the church of St Mary Magdalene, Launceston, Cornwall. The windows include the arms of four generations of the Lawrences – Arthur (great grandfather), Humphrey (grandfather), Humphrey (father) and Northmore Herle Pierce Lawrence (dedicatee). Source – Website – Cornish Stained Glass, Launceston, St Mary Magdalene. 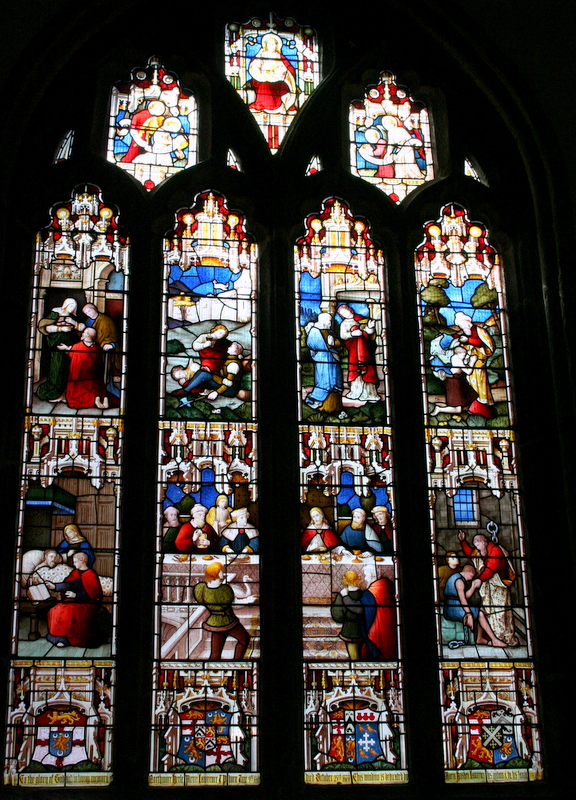 To the glory of God and in loving memory of Northmore Herle Pierce Lawrence. Born June 9th, 1801; died October 23rd, 1878. This window is dediated by Maria Hosken Lawrence his widow & by his family.

At the bottom are four sets of arms – 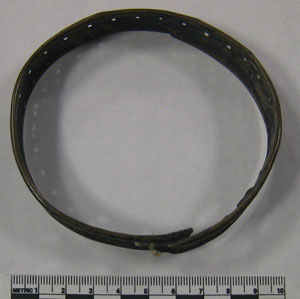 A very unusual piece of history survives that once belonged to Charles is in the Ashmolean Musuem in Oxford University today – that of one of his dogs collars! It was found in a drain at All Souls College, Oxford in August 1896.  Charles matriculated from Oxford in 1709.

“Collars were also used as decorative features, and the more elaborate they were, the more they enhanced the status of the owner. More importantly, dog collars came to be used as a means of identification. 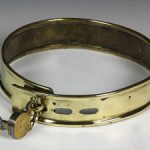 When they were marked or engraved with the dog owner’s name, the collar became the object that gave proof of ownership. As we shall see, with so many dogs in Oxford during the eighteenth century, this was a very necessary item. Our two dog collars from the Manning Collection would have marked the canine property of George Dashwood and Charles Kendall.” 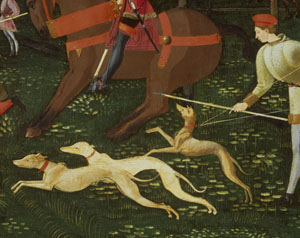 According to the British Archaeology at the Ashmolean Museum website, the collar belonging to Charles Kendall was very small and adjustable, probably for a whippet.  (The very dog I own today!).

Many university students kept their dogs for hunting and often paid for them to be boarded at private houses outside the universities.

Charles died at the age of 40 years in September 1731 in Exeter, Devon and was buried in the church of St Lawrence in Exeter on 15 September 1731. His last daughter Charlotte was baptised in the same church earlier that year in January, so poor Elizabeth was left with five daughters to raise.

The wealthy widow Elizabeth was now aged 47, and left with a large young family married for the third time, this time to Mr John Weeks, esquire of the same parish as herself – St Lawrence, Exeter. The couple married by license on 26 April 1742 at Poltimore, five miles northeast of Exeter.

Once again Elizabeth was embroiled in court cases, and appears in another Court of Chancery document held at The National Archives, Kew.

Unfortunately John lived just a few years longer and died in June 1749 at Lezant, Cornwall. He was buried at Holy Trinity, Exeter on 18 June 1749. His will was proved by his wife Elizabeth, widow and relict in 1750.

The Cornwall Record Office holds a lot of deeds and papers of the ‘Lawrences and connected families’ including wills and correspondence. Among these papers is a 1750  document entitled “Kendall: administrators’ accounts on the death of John Weekes, 3rd husband of Elizabeth Kendall” Reference LR/121.

Elizabeth Weeks, nee Northmore, otherwise Herle and Kendall, died just three years later aged 56 in Lezant, Cornwall. She was buried in Lezant on 17 January 1751. Elizabeth’s will was proved in 1751 in the Consistory Court of the Bishop of Exeter.

The Historical Survey of the County of Cornwall, Vol 2, Part 1 has a short entry relating to Elizabeth and her three husbands. Available on Google books.

Historical Survey of the County of Cornwall, Vol 2, Part 1