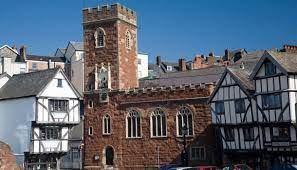 John was described as a clothier of Exeter in his will in 1679 (Devon Wills).

Abraham was a fuller and merchant in Exeter, Devon. See Samuel Pierce’s page about fullers.

On 25 October 1691 Abraham married Rebecca Bawden at St Davids, Exeter, Devon. Rebecca was the daughter of Humphrey Bawden (1629-1692) and Elizabeth Poole, and she was baptised on 13 February 1670 at Holy Trinity, Exeter. 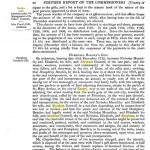 The Charities in the Co of Devon, Commissioners for Inquiries concerning charities 1839

In 1678 Humphrey gave a gift to the parish of St Mary Arches, Exeter, an annuity or yearly rent of 20s out of two tenements and cottages called Friernhay by charitable intent. (The Charities in the Co of Devon – googlebooks)

Rebecca Guswell died in March 1701, possibly in childbirth aged just 31 years and was buried at Holy Trinity Exeter on 17 March 1701.

Abraham married again to Dorothy Fisher, the widow of Timothy Terry, grocer of Exeter and had four children. Timothy Terry had died in Exeter in 1709 leaving Dorothy with two young surviving children.  Timothy and and Dorothy’s children were Robert 1700-1702, Elizabeth 1702-1705, Dorothy 1702-1728 and Timothy 1707-1736.

Abraham and Dorothy’s children were –

In 1679 Abraham Guswell was involved in a personal dispute, the subject being his father’s will and disposal of his estate – John Goswell of Exeter. 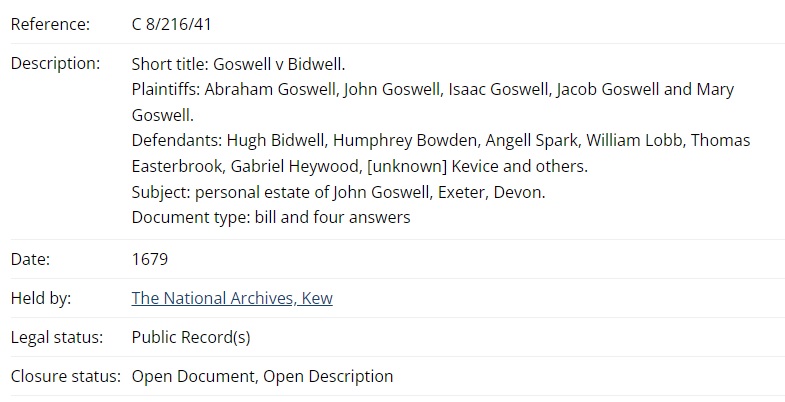 Abraham appears in two legal court cases regarding property in St Mary Arches and Holy Trinity, Exeter, Devon in 1694 and 1695 –

Abraham Guswell / Goswell died sometime before his will was probated in September 1719. In 1723 a legal dispute arose which the Pierce and Guswill families were involved. It seems there was a dispute over Abraham’s will between the descendants of his two wives – 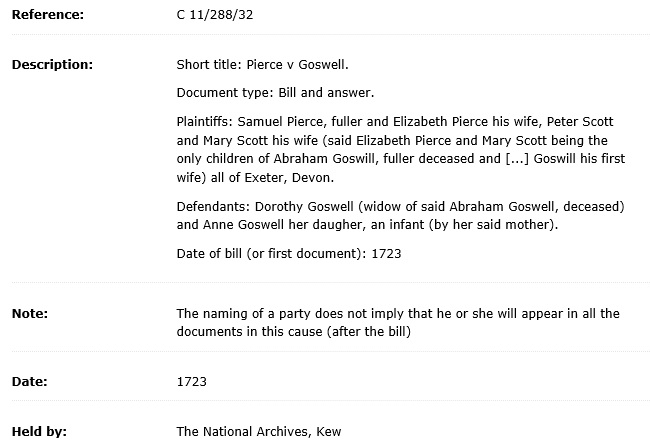 In Abrahams 1719 PCC will (available on Ancestry) he leaves 100 pounds to his daughter Mary Scott, and to her children Peter and Robert, 50 pounds each. To the daughters from his first marriage he gives Elizabeth Goswill 450 pounds. To his brother John shillings per week for life, and his estate in St George, Exeter. To his brother Isaac and sister Mary Talbott, 10 pounds each, the remainder to his wife Dorothy Goswill but if she should marry to his daughter Penelope and Ann and son Abraham 450 pounds each, and to Abraham all his estates and houses, and if these children should die before 21 then the money and houses revert to my daughters Mary Scott and Elizabeth Goswell in equal shares. 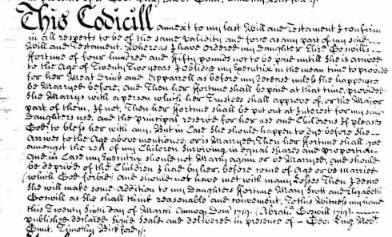 The Codicil of Abraham Guswell’s will in 1719

A complicated Codicil addendum states that his daughter Elizabeth Goswill’s fortune of 450 pounds is not be paid until she is 21 years, and if his wife Dorothy remarries, then the fortune is to go to his surviving children of his first marriage only.

I haven’t been able to gain access to the document held in the National Archives to see the outcome of the dispute.

Abraham’s second wife Dorothy Goswell died in 1746 in Exeter. Her very long and complicated PCC will is also available on Ancestry. In it she mentions- 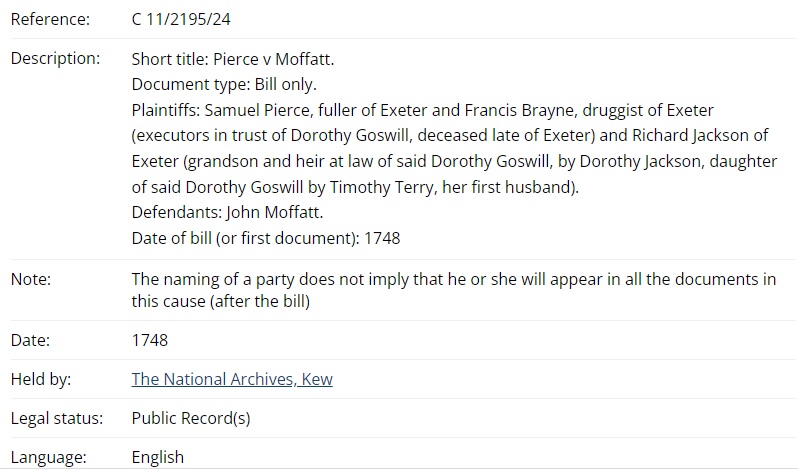