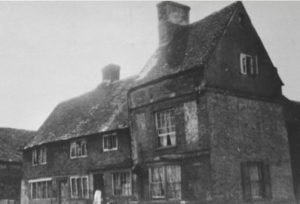 Thomas was baptised on 1 April 1782 at Aylesbury, Buckinghamshire, 11 miles from Winslow. Thomas was one of at least two children born to the couple. His brother John was a schoolmaster at Rogers Free School in Winslow in 1798, like his father Thomas senior in 1781. In 1798 both Thomas and his son John were listed as schoolmasters of Winslow (England Land Tax Redemption records). See more about Winslow here. 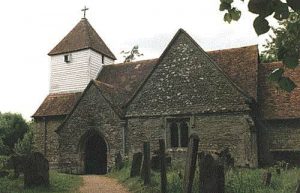 Thomas firstly married Mary Reeves on 6 July 1814 at her home church in Dorton, Buckinghamshire by license. Witnesses to the marriage were Ruth Reeves and Elizabeth Passmore.

Christopher, farmer of Dorton, appears in the “Posse Comitatus” – a register of the names and occupations of all persons residing within the County of Buckingham between the ages of 15 and 60. A will is listed for him as being of Rofford, late of Dorton in September 1829.

Their marriage announcement appeared in the Oxford University and City Herald Newspaper on 6 August 1814. Thomas was living in Winslow, and Mary in Dorton. 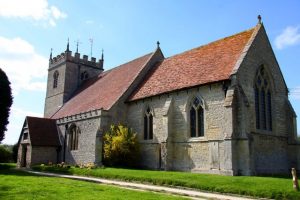 Chalgrove is a village and civil parish in South Oxfordshire about 10 miles southeast of Oxford. The parish includes the hamlet of Rofford and the former parish of Warpsgrove with which it merged in 1932. Upper Winchendon is 16 miles from Chalgrove, and 6 miles from Aylesbury.

Like his father and brother Thomas began is working life as a schoolmaster, and can found working as one in Chalgrove at the time of his daughter Ann’s baptism in 1816.

In 1818 at his daughter Emma’s burial, his residence was given as Mains Hill, Upper Winchendon.

He had moved to Upper Winchendon soon after 1816, residing there as a schoolmaster until about 1827 when he moved again by the time his daughter Mary was born in Upper Winslow, his birthplace (10 miles from Upper Winchendon). 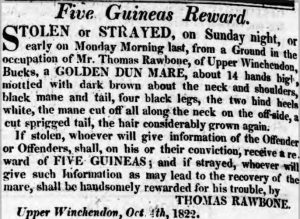 In October 1822 the family while the family was living in Upper Winchendon, it seems Mr Thomas Rawbone had his horse stolen, as he placed an advertisement in the Oxford University and City Herald newspaper asking its whereabouts, and offering a reward of five guineas.

But by 1828 when daughter Martha was born he had moved down to London and she was baptised at St James, Clerkenwell. Thomas has had a big change in occupation, and he is now listed as a victualler (a person licensed to sell alcohol) and publican living in Cowcross Street, Islington.

In 1828 Thomas was listed in the Register of Victuallers Recognizances 1828-29 Finesbury Division, Parish of Sepulchre. At General Meeting in March 1828 – Person Licensed – Rawbone, Thomas; Sign of House – Red Lion; Where situated – Cowcross st. 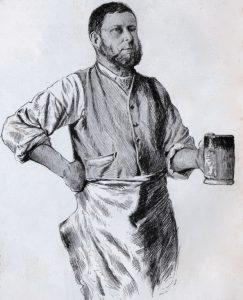 In 1830 the Beer Act was passed which meant inn keepers could now brew and sell beer from their premises. As a result many more beerhouses were opened, causing an influx of brewers and innkeepers into the city of London. It seems Thomas now operated as the publican of the “Red Lion” hotel at 44 Cowcross Street (London City Directory).

This address at 20 Bath Place, New Road, Marylebone is where he was publican and wine and spirit merchant of the “Adam and Eve” hotel in 1833 (London City Directories). Living next door is Mr George Emerson (father of Louisa Emerson, who was the first wife of Dr Samson Davis – husband of Thomas’s daughter Ann). 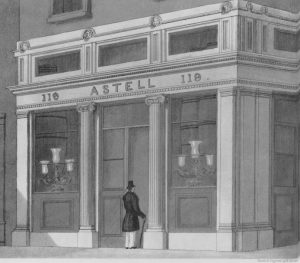 By 1839 Pigots Commercial Directory of London lists Thomas of 119 Tottenham Court Rd, under the Wine and Spirit Vaults category.

Between 1839 and 1843 Thomas was the occupier and owner of Wine Vaults at 119 Tottenham Court Road, London (corner Grafton Street, now Grafton Way). The property was know as the “Northumberland Arms”.

Two of Thomas and Mary’s children, Hardwicke and Ann, are residing at this same address in Tottenham Court Rd, St Pancras on the night of the 1841 census. Hardwicke is listed as the publican, and Ann living with him, as well as several bar staff. 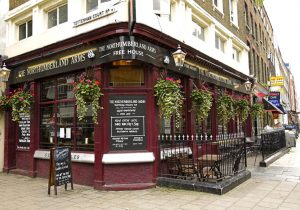 Their parents Thomas and Mary are not with them, and strangely I can’t find them listed on the census anywhere in England. Were they down in the cellar at the time the enumerator called?

A few years later in 1846, an advertisement appeared in the Law Times of London newspaper regarding the dissolution of the partnership between T Rawbone and E Hawks, Brewers of Fulham Road in Chelsea.

The same entry also appears in Perry’s Bankruptcy Gazette on 28 August 1846 under Partnerships Dissolved, with the notice to take place from 6th December 1846.

In the London Commercial Directory 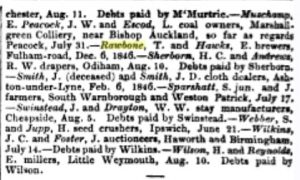 for 1846 the pair appear listed as Rawbone and Hawks, scotch ale brewers, Holywood Brewery, Little Chelsea. There are no further entries for Thomas at either Tottenham Court Rd or at Bath Place, Marylebone.

In the Era Newspaper on 17 October 1847, Thomas Rawbone is listed under Transfer of Licenses for Islington – “Castle”, Holloway Rd. License transferred from John Tapps to Thomas Rawbone. “The Castle” later changed its name to “The Bailey”. 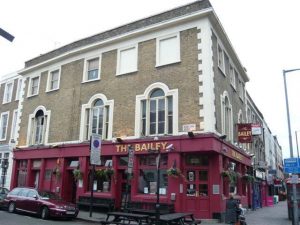 Mary was buried at St James, Westminster, Piccadilly, London with the burial register stating her residence was Albion Terrace and that she was aged 59.

Mary’s will, written 1 October 1849, just three months before she died, mentions that she received 1000 pounds in stock left to her by her father Christopher Reeves, and that she wished to bequeath the stock to her four named children – her son Hardwick of Islington Row, Birmingham, and three daughters Mary, Ann and Elizabeth. She appointed her son Hardwick the sole executor.

The Reverend Hardwicke Rawbone (who changed his name to Rathbone) was first a publican, and then attended Cambridge University in 1842 and became a clergyman. 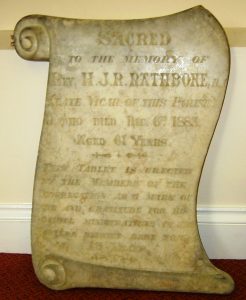 He died on 6 Dec 1883 at 11 Somerset Place, Stoke near Devonport. The church of his burial has an impressive memorial at St Michaels St Barnabos in Devonport. His personal estate of 837 pounds went to his widow Ann.

We know that two of the other children of Thomas and Mary died as babies – Emma and Martha,  Julia died aged 10, and possibly John and Mary had also died as they weren’t mentioned in any census or will documents like the rest of the family.

Daughter Ann had married in 1846 and had moved to Mile End, Stepney with her husband Dr Samson Davis.

Two years later in the 1851 census the remainder of the family (Thomas and daughters Mary and Elizabeth) can be still found at 1 Albion Place, Holloway Rd, Islington, London running the “Castle” Hotel.

It stated that Thomas Rawbone, was the head, a widower, aged 68, occupation licensed victualler, and that he was born in Winslow, Buckinghamshire. With him are his two unmarried daughters Mary, aged 24, born in Upper Winslow and Elizabeth, aged 21, born Clerkenwell, Middlesex.  There is also James the barman, and two servants Eliza Long and Sarah Neil.

In the 1851 Finsbury Petty Sessions, Thomas when applying for his yearly victualler’s license was named as the Publican of the “Castle Hotel” at 81 Holloway Rd, and soon after the hotel became “The Bailey”. 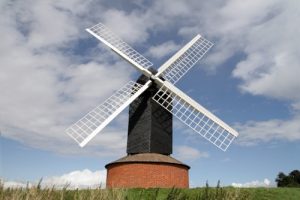 Anne was aged 66, and her father was William Welford, a farmer. Anne was born about 1789 in Brill, and at the age of 28 had first married Emmanuel Griffin, on 1 May 1817 in Brill. She appears in both the 1841 and 1851 census living in Brill with Emmanuel, a grocer and a general shopkeeper. Emmanuel was 10 years older than Anne, and he died in 1851 in Brill. In his will he leaves property and money to his wife and nephews only so it appears they didn’t have any children.

Soon after Thomas’s marriage to Anne, his daughter Elizabeth died in Brill in 1855 aged only 26 years. In her will she left her estate jointly to her father Thomas and her siblings Hardwick, Anne and Mary – two cottages situated in Little Chapel Street, Westminster, London.

Thomas died on 20 December 1856 aged 75 years at his home in Brill. He was buried in Brill on 23 December just before Christmas in Brill.

Only three weeks earlier, Thomas had written an extensive will on 2 December 1856, which was proved in London on 28 April 1857. He stated he was of sound mind, and the beneficiaries were his wife, one son, two daughters and a son in law. 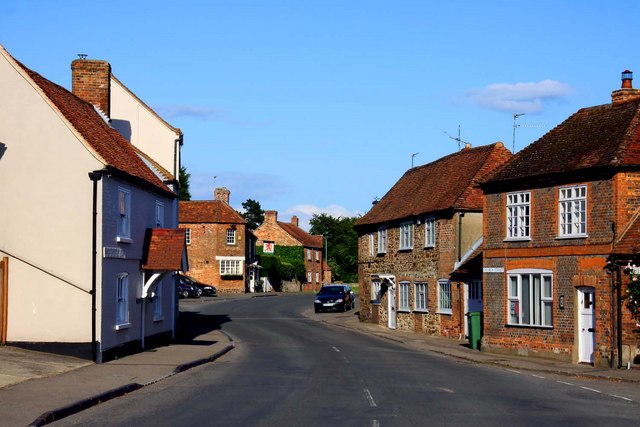 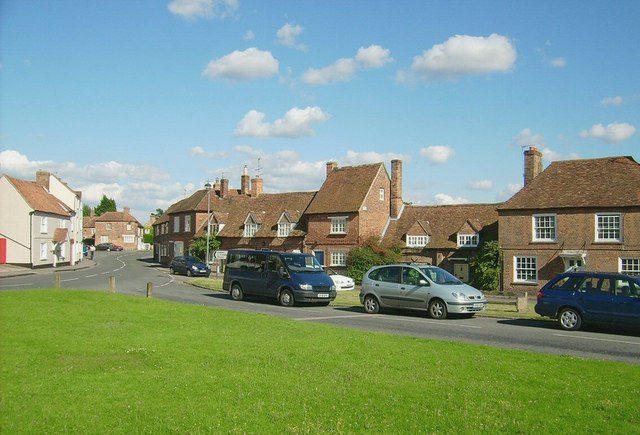 The legacies were  as follows –

 to his wife Anne Rawbone he leaves the interest of 300 pounds for the term of her natural life and 10 pounds to be paid to Anne within 1 year of Thomas’ death and
of these 300 pounds have been invested in government consols or funds.
 to his son Rev Hardwicke John Reeves Rawbone 50 pounds out of the above 300 pounds after his wife’s death, and his gold watch chain, diamond ring, and wearing apparel and also to son Hardwicke the interest of the small fee farm rents at Bierton by Aylesbury.
 to his daughter Anne Reeves Davis (wife of Sampson Davis, surgeon) 50 pounds out of the 300 after Anne’s death.
 to his son in law Sampson Davis his silver snuff box.
 all household furniture brought to this house to be sold to pay for funeral expenses.
 those goods that belonged to his wife at marriage to be sold but remain in her possession and at her disposal.
 Gives to daughter Mary Reeves Rawbone 200 pounds left in funds after his wife’s death.

The will was witnessed by Alfred Hyde and Abel Whichello of Brill, and his daughter Mary Reeves Rawbone was made executrix.

The will provides details of his personal possessions – a silver snuff box, a gold watch and chain, a diamond ring and wearing apparel. This declares that he is a man of property, investments, and jewellery and obviously wanted to keep it in the family.

Thomas was also in possession of three hundred pounds of Government consols which he had invested, and was receiving annual interest for. At the time, these were paying 3% interest.

Consols (bonds) – originally short for consolidated annuities, but can now be taken to mean consolidated stock is a form of British government bond (gilt), dating originally from the 18th century.”

Thomas was obviously a gentleman of at least middle class standing – noting that he possessed and bequeathed his gold watch and chain, and his diamond ring and wearing apparel to his son. According to “The Gentlemen’s Book of Etiquette and Manual of Politeness (A complete guide for a Gentleman’s conduct in all his relations towards society)” of 1860 – “Diamonds and brilliants are quite unsuitable to men, whose jewelry should never be conspicuous. If you happen to possess a single diamond of great value you may wear it on great occasions as a ring, but no more than one ring should ever be worn by a gentleman”. 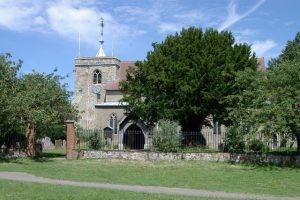 His second wife Anne Rawbone (Griffin nee Welford) died on 10 November 1863 aged 75 in Brill and was buried with Thomas on 14 November 1863 at Brill. When her will was probated in October 1864 her remaining estate of less than 200 pounds was proved by her sole executor John Jennings of Brill, a builder.

Obviously Thomas had made sure that all his previous wealth from his first wife and that of his own making was bequeathed only to his own children and continuing in the family line.