Michael James Clarke was born in Ireland around 1844, the son of Patrick Clarke.

His death certificate states he was born in Ireland, parents unknown, and that he spent his time – 8 years in New South Wales, and 17 years in South Australia and that he died in 1896 aged 55 years in Broken Hill. The informant was his daughter Susannah.

If the information of his death certificate is true, Michael immigrated to Australia around 1870, probably into Adelaide.

We know for a fact that was in Adelaide by 1871, where he married 22 year old Margaret Mary Simons on 20 February 1871 at St Francis de Sales, in Mount Barker, South Australia. Michael was aged 27 years. The marriage certificate states they were both living at nearby Echunga.

Echunga is a small town in the Adelaide Hills located 34 km south-east of
Adelaide in South Australia. The area was first settled around 1839, with the town property surveyed in 1849. Gold was discovered in 1852 and Echunga became
the first proclaimed goldfield in South Australia.

She was baptised on 25 June 1850 in Mount Barker, South Australia. The sponsors were Peter and Winifred Tierney. 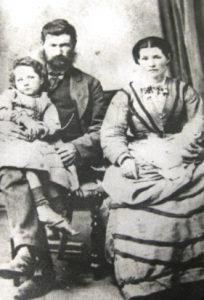 Michael and Mary Clarke with daughter Mary around 1872

Michael and Margaret had 6 girls, all the births were registered at Napperby, SA. Given the large gap between the first two children, there may have been more that didn’t survive childhood. His death certificate states there was also one male and one female deceased. 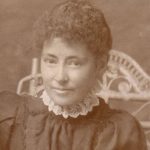 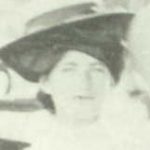 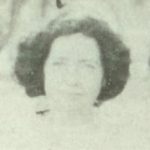 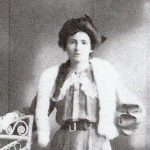 By 1877 the family were living in Napperby, South Australia, and Michael and Margaret were operating a general store there. 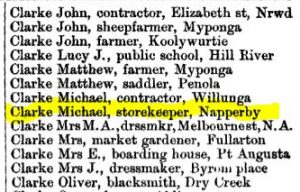 Napperby is 223 kms north of Adelaide, and only 14 kms due east of Port Pirie on the Spencer Gulf. The town was founded in 1874, when farmers started moving to the land. A large sandstone quarry operated in the foothills. Town allotments were sold in 1877 and a government school began there in 1880. 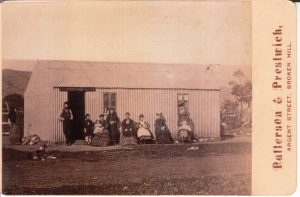 Sometime between June 1887 (birth of daughter Rose at Napperby) and 1889, the Clarke family decided to leave Napperby, and travel overland to Broken Hill, New South Wales. The trek must have taken several days, the journey being over 390 kms. 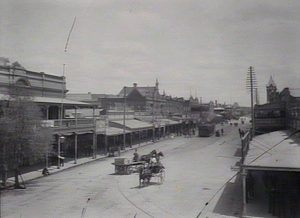 Broken Hill was founded just the year before in 1883 by boundary rider Charles Rasp, who patrolled the Mount Gipps fences. In 1883 he discovered what he thought was tin, but the samples proved to be silver and lead.

The orebody they came from proved to be the largest and richest of its kind in the world. Mr Rasp and his friends formed the company which is now known as BHP (Broken Hill Proprietary company).

The company started mining the massive ore body containing the world’s richest source of silver, lead and zinc, and many miners, such as young Michael Clarke were lured away from the promise of gold to try their luck in the ‘silver city’. 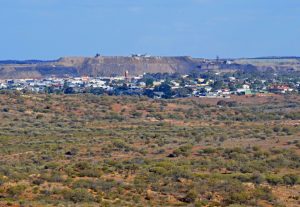 Many miners worked in deplorable conditions; breathing silicon-laden dust while working  underground or the lead fumes produced by the smelters.

Many died of miners’ phthisis or lead poisoning. More than 800 men were killed on silver, lead and zinc mines in the city.

Between 1889 and 1896 Michael and his family lived in Broken Hill, while Michael worked in the huge silver mine in the town.

Michael died on 6 July 1896, aged 55, while he was living at the corner of Beryl and Garnet Streets, Broken Hill (which is now the site of the Broken Hill High School).

He died of an abdominal obstruction and haemorrhage, most likely a hernia caused from lifting heavy weights in his job in mining like so many other miners in this particular mine.

He is buried in the Broken Hill Cemetery in the Roman Catholic Section Gene Q, Grave 21. 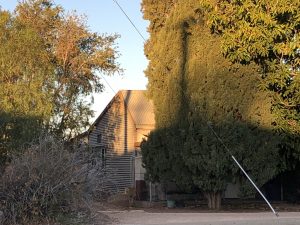 His wife Margaret was left to bring up the girls on her own, and she lived until the age of 74 years, dying on 12 June 1922 at her residence at 142 Buck Street Broken Hill.

Margaret was also buried in the Broken Hill Cemetery in the Methodist section M5, Row 43, Grave 7.

Margaret’s will was proven in December 1922, and her daughter Rose Kathleen was made the executor and sole heir of her property in Buck Street. 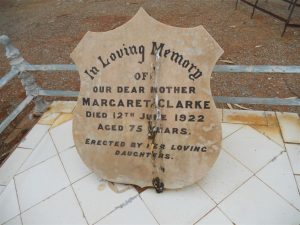