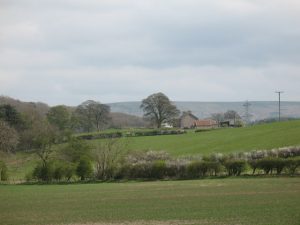 Robert Dennis was born in 1754 at Oxbank Farm near Nether Silton, Leake, Yorkshire as the second child of Robert Dennis and Ann Cuthbert.

When he was 19, he married Mary Swales, daughter of William Swailes and Mary, on 25 Nov 1773 in Osmotherley, Yorkshire, England. (Osmotherley is 7kms from Leake).

Mary Swales/Swailes was born in March 1749, her mother Mary dying in childbirth. Her father William remarried Ann Kay in 1754 and had a daughter Dorothy Swailes born and died 1758 Osmotherley. William died in 1793 and is buried in Osmotherley.

Mary had an older brother Snowdon Swailes  who was born in 1748. Snowdon appears in the 1841 census for Osmotherley as a linen weaver.  He married Elizabeth Newham in 1772 and had three children Mary b 1777, and twins John and William born in 1780. He died on 15 February 1842 aged 93 and is buried at Osmotherley.

Robert Dennis and Mary Swales both of this parish were married in this church by Banns 25th Day of November 1773 by me Wm Robinson,. This marriage was solemnized between us in the presence of Ch Wrighton, Ch Kilrington.  (extract from Osmotherley Parish Register)

Robert was a farmer living in Landmoth Wood, near Leake, Yorkshire, England in 1779 (residence given at son’s baptism). 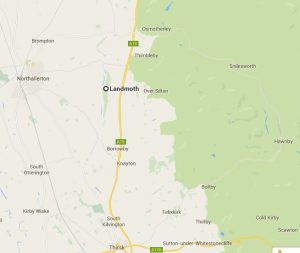 By 1819 Robert he was living in Osmotherley, Yorkshire, England as evidenced by a document dated 06 Apr 1819 found in the North Yorkshire archives. It was a “Bill of indictment for riot and assault” naming Robert Dennis the younger, and seven other men of Osmotherley. Apparently they broke into the house of Oswald Thompson, assautled him, and broke his dinner plates, spinning wheel, and bed. Despite the evidence of witnesses, a verdict of ‘no bill’ (no case to answer) was pronounced.

By 1823 Robert appeared in the local trade directory (Baines) –
Farmer – Robert Denniss – Professions and trades in 1823 in Osmotherley, Yorkshire, England. 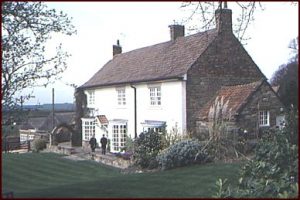 He was employed as a farm labourer at “Clack Farm” which was advertised for sale in the  Gazette 31 July, and 7 Aug and  21 Aug 1824 in 1824 in Osmotherley, North Yorkshire, England. 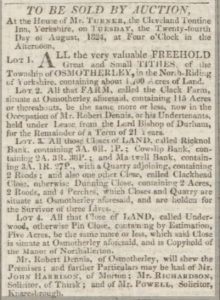