Hercules “Henry” William Jameson was born between 1788-1792 in Lerwick in the Shetland Islands, Scotland. In some records (British Merchant Seaman register) his birthdate is given as 1 December 1792. 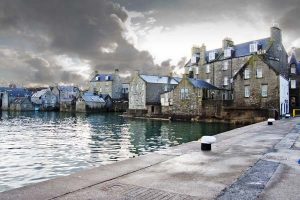 There is a Jane Jameson who died in Lerwick in 1843 aged 90 that could possibly be his mother.

By 5 July 1806 Hercules was serving aboard the British Royal Navy frigate ‘Spartan’.

HMS Spartan was a Royal Navy 38-gun fifth-rate frigate, launched at Rochester in 1806. During the Napoleonic Wars she was active in the Adriatic and in the Ionian Islands.

Hercules served aboard this ship until 20 September 1810. 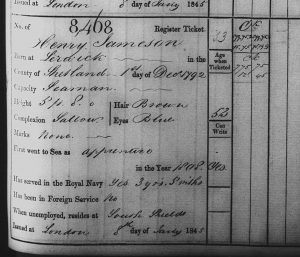 In 1810, Spartan was operating off Naples and there fought and inconclusive engagement against a much larger Neapolitan squadron on 3 May, for which Captain Brenton was highly rewarded. 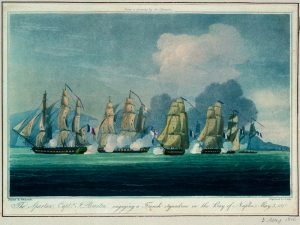 ‘Spartan’ engaging the French in 1810

Hercules lost a leg in action (10 killed, 20 wounded) with the French in this battle per account of battle in this Naval Intelligence newspaper 1810. (The Scots Magazine Vol 72, 1810). 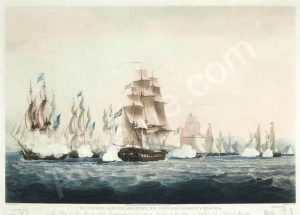 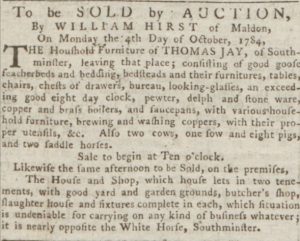 Sarah’s grandfather also Thomas Jay (1751-1808), a butcher, and wife Susanna, lived in Southminster, Essex and in 1784 placed an ad in the Chelmsford Chronicle newspaper selling his furniture, house and butchers shop before they moved to the village of Great Wakering.

Sarah’s cousin Henry Jay, butcher of Great Wakering (son of Henry Jay, butcher) was convicted of sheep stealing in 1820 in Southend at the Essex Assizes with two other men. (England & Wales Criminal Registers 1791-1892). The other two men (Thomas Fairhead and Henry Gilliott) were hanged, but Henry was sentenced to death, but had his sentence commuted to transportation. More details here.

So it appears after Hercules and Sarah married in 1815 in London, they stayed there for a few years before Mary moved to Sussex where their second child Hercules was born. By 1833 they had moved back to Lerwick, Scotland and their son Hugh was born there in September 1833.

Soon after in December 1833 the family was living in Greenwich, where Hercules was living as an out pensioner at the Greenwich Hospital after service in the Royal Navy.

Hercules, a seaman, had been discharged from the Royal Navy on 4 September 1834 aged 46 when he lost his left leg above the knee while serving aboard the ship ‘Spartan’ while engaging the French Squadron. His children were then aged Mary 17, Hercules 7, Eliza 4 and Hugh one year old baby. Click on the images below to read about the battle. 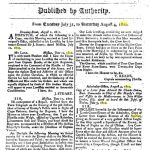 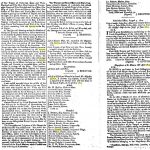 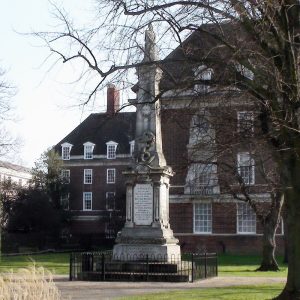 The former burial ground of the Royal Hospital for Seamen is a railed area within the grounds of Devonport House, with a number of monuments outside the boundary railings.

The memorial reads – in memory of the gallant officers and men of the Royal Navy and Marines to the number of about twenty thousand, formerly inmates of the Royal Hospital Greenwich, whose remains were interred in this cemetery between the years 1749 and 1869.

The Devonport Mausoleum was built in 1750 and has a plaque recording the first burial in 1749; by the time the Hospital was closed in 1869 some 24,000 men and some women were buried here.

Sarah was left to look after her four children, with no income. Not surprisingly she remarried William Emmerton on 3 July 1837 at St Luke Old Street, Finsbury, London.

William was 30 years her senior having been born in 1776. He was stated to be living off independent means, probably a pension, as he made his will while residing as a pensioner at Greenwich Hospital. 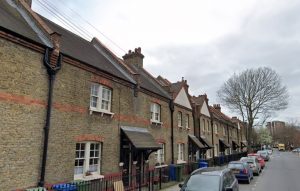 Unfortunately Sarah’s new husband, died a few years later aged 73 in April 1849 at Walworth in Surrey. He was buried at St Peters, Walworth on 11 April 1849.

In his will, he leaves two properties 10 East Lane and 19 Portland Street, Walworth, Surrey to his wife Sarah. Sarah’s son and my 3 x great grandfather Alexander Stow is appointed the executor and witness to the will.

In 1851, shortly after her husband’s death Sarah Emmerton, now aged 54, moves to live with her 17 year old son Hugh, and grandson Edward Stow, aged 3 at 16 Elizabeth Terrace, Bermondsey, Surrey. Strangely her son Hugh’s occupation is given as a manufacturing chemist although there is a chemist Mr William Samuel living next door) as he is a clerk and accountant in later census documents. Perhaps he served an apprenticeship and then changed professions, or perhaps the enumerator recorded his occupation incorrectly. 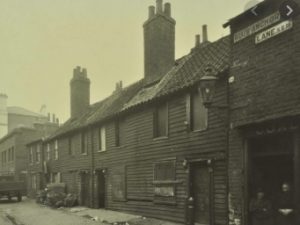 When Hugh married Elizabeth Smith in 1858, he gave his residence as Blue Anchor Road. His sister Eliza Hutson was a witness.

Living with her is her granddaughter (by daughter Eliza) Kate Hutson aged 9, attending school.

Sarah died in July 1871 in Hillingdon aged 75 years. I’ve been unable to find her burial record.