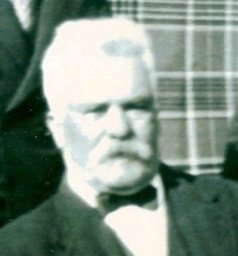 William Jasper Miles was born in Dulwich, London in October 1849 to parents James Miles, a bootmaker from Surrey and Sarah Wyatt. He was baptised at St Giles Camberwell, London in March 1850. William was the third child of ten children.

The Miles family arrived in Melbourne in May 1853 aboard the immigrant passenger ship the “Lady McNaghten” when William was only four years old.

At first the family lived in Brighton, Victoria before moving to Dandenong in 1859, and then to Cranbourne in 1861.

William’s father James was instrumental in founding the Anglican church in Cranbourne (St Johns), and his son Oliver was one of the first children to be baptised there in 1865.

A lectern hand carved from a block of King Bulli Pine on a column of silky oak, in memory of James and Sarah Miles, was presented to St Johns in 1964, on the hundred-year anniversary the church by a granddaughter of their child Mary Ann.

William married Harriett Maria White in 1878 in St James church, Dandenong, and moved from Cranbourne to Violet Town in 1882 with his small children Percival and Ethel.

William and Harriett had 11 children, with Kate, the first to be born in Violet Town.  They lived in Tulip Street, Violet Town opposite the primary school, and next door to the then Presbyterian Church.

William worked as a labourer, and times were hard. In Nov 1893 this small note of thanks was placed in the Euroa Advertiser, after the death of their baby daughter Daisy.

In 1901 he lost his five-year-old daughter Rosie to diphtheria, and 12 other children died around the same time in Violet Town from the disease.

In 1902 he was working at Herman Meyers Violet Town sawmill when a number of 10ft lengths of wood that were stacked gave way and pinned him to the ground rendering him unconscious. Thankfully he escaped with just shock and bruising. (Benalla Standard 21 Feb 1902).

In Feb 1903 William was again injured when he met with a painful accident while carting water for the engine, by being thrown heavily to the ground from a tank in a dray through the wheel going in a hole passing the post office, knocking him to the ground, and causing him severe internal injuries. (Euroa Advertiser 6 Feb 1903). In 1904 son Percy’s marriage certificate states his fathers occupation as a sawyer.

Oldest son Percy was a Police Constable in Williamstown.  William & Harriett lost several of their 11 children-  four died as babies -Emma, Daisy, Alice and William, Rose as a 5 year old, and they watched two sons Herbert (Bert) and George fight in the 1st World War.

Herbert was a baker, and fought in the 3rd Light Horse division at Gallipoli. Somehow, he survived and made it home in 1919. George was employed as a clerk until he signed up in 1915 with the 7th Infantry battalion, and also spent two months at Gallipoli. He was injured with a fractured jaw and ankle, and hospitalised in London in 1916. He returned to fight and returned to Australia in 1920.

William and Harriet enjoyed a long, happy marriage, despite the many tragedies that seemed to follow their lives.