John Davis was born around 1750, probably in the London or Middlesex area. 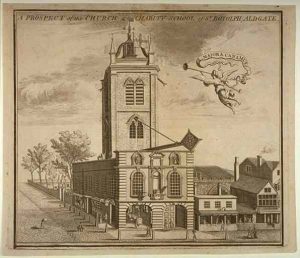 He married Sarah Biddle on 13 November 1768 at St Botolph Aldgate, London. Banns were called on 30 October, 6th and 13th of November.

Both parties state they were from this parish, and were a bachelor and spinster.

John didn’t sign, but made his mark on the marriage register entry, while Sarah signed her name. Elizabeth Charlton, Sarah Charlton, John Biddle and Henry Baldwin were the witnesses. 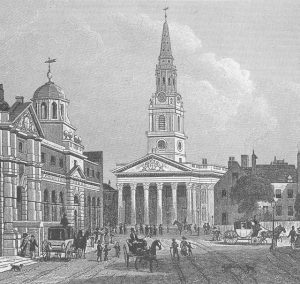 St Martin in the Fields

Straddling the eastern boundary between the City of London and Middlesex, St Botolph Aldgate was a large and heavily populated parish. The parish suffered considerable poverty, disease and poor housing, but there was also a large minority of wealthier inhabitants, considerable poor relief and a high level of charitable giving.

Two years after their marriage in 1770, John and Sarah were residing in Vine Court, St Boltolph Aldgate according to the London Tax records.

From 1777 to 1779 John and family were living at Vine Court Lower and Red Cross Street, according to their children’s baptisms. 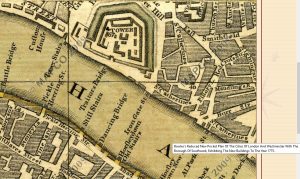 Other records that may relate to this John Davis –

John Davis died just around the corner from Butlers Buildings, in Dock Street, Whitechapel in April 1828 aged 71. (Dock St runs off Upper East Smithfield). He was buried on 20 April 1828 at St Mary Whitechapel.

I’ve been unable to find a will or probate papers for John or Sarah.