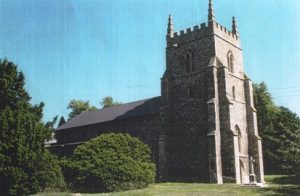 Richard White was born in 1828 in Aston Rowant, Oxfordshire to parents Eden White junior (1800-1867) and Maria Britnell (1800-1864). Eden was an agricultural labourer at nearby Kingston Blount. The White family lived in the Aston Rowant area for hundreds of years.

Richard was baptised on 29 June 1828 in Aston Rowant, Oxfordshire.

In 1841 Richard aged 13 was living with his parents and siblings in Kingston Blount.

Richard was one of ten children, and aged 20 in 1848 he and his 18 year old brother Eden immigrated to Australia aboard the immigrant passenger ship “Mahomed Shah”.

They were both stated as shepherds, coming to work for Mr John Patterson of Gumbargana (north of Corowa). 211 immigrants arrived in Melbourne on 5 July 1848 aboard the “Mahomed Shah”. The ships passage out to Australia took 98 days.

On board the ship Richard met Emma Smith, a heavily pregnant, unmarried lady travelling with her brother and family. Shipboard romance must have blossomed, because despite Emma giving birth to her baby on the ship, Richard married her soon after in May 1849 in St Peters, Melbourne. Richard & Emma were both illiterate.

In Oxfordshire, England Richard and Emma were living only four miles away from each other (Richard in Kingston Blount, and Emma in Towersey), so perhaps Richard was the father of the baby after all, and they eloped to a new life?

Richard and Emma went on to have another seven children together, including Harriett Maria White in 1854, the mother of Kate Jackson (nee Miles). Richard and Emma’s first five children were born in Richmond and Collingwood. (Kate 1850, Maria 1852, Harriett 1854, Thomas 1857, Richard 1861).

Daughter Emma was born in Violet Town 1866, but the family were back in Collingwood in 1867 for the birth of their last child daughter Ellen (Nell – who would later marry Jack Llewlyn).

Richard’s brother Eden was also up in Violet Town by 1860, his third child Ellen being born there.

In 1882 the local Benalla newspaper mention Richard’s son Richard applying for land at Boho to the Land Board.

Richard senior held land under license from the Crown in the parish of Boho. It consisted of 99 acres.

In 1886 Richard senior was granted additional land in Boho. It was CA 16B and comprised 54 acres. On this land he erected a slab building with five small rooms (Probate affidavit from son Thomas 1889). 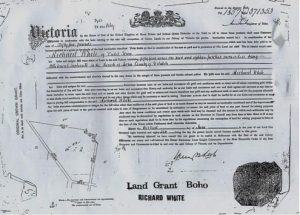 Richard died in June 1888 at his farm in Boho, aged 60, and was buried in the Violet Town Cemetery with his wife Emma. Emma died aged 80 in 1905. There is no headstone.

Richard died without making a will and probate was granted to his son Thomas White. His estate inventory states as well as 99 acres of land he owned 4 horses, 4 cows, 2 calves, a spring cart and poultry.