I have been unable to confirm his baptism as the register begins in 1566 online. 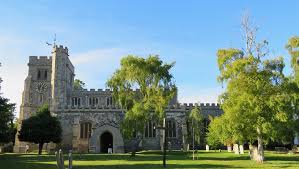 Roger and Joan had five children, with the father being recorded as “Roger Bricknell” –

The children were all baptised at Tring, Hertfordshire.

Roger was 24 years old when his father Harry died in 1552.  The will granted him 26 shillings 8 pence yearly until he comes of age, then £6-13-4d and one bed from the house, half of the implements from his father’s shop (blacksmiths), and if his mother remarried, her three 3.5-acre plots at Tring near Wilstone.

Roger was a blacksmith in Tring, like his father Harry.

Online trees have Roger Britnell’s death in 1599, but he definitely does not appear in the burial register in 1599, as his son Zacharie/y does.  There is an entry in the Burials for 1600 in January that looks very much like Roger Britnell or is it Richard?

Joan was a widow when she wrote her will on 16 December 1601, and it was proved in 1602, after her death in May 1602 in Tring. Her daughter Agnes, then unmarried, was Joan’s executor and principal heir, presumably because Christopher had already inherited property and was independent.

Joan was recorded as “Mother Briknill” in the Tring Burial Register, and she was buried on the 26th day of May (last entry). The Bishops transcript of this entry records it as “widow Britnell”.