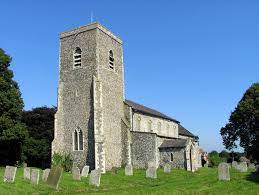 He was baptised on 22 May 1580 at the parish church of All Saints, Marsham, and only his father’s name Robert was included on the baptism register.

Robert’s occupation was given as a shoemaker on his children’s baptisms, so it is likely he served an apprenticeship, probably to his father who was also a shoemaker in the village of Marsham.

Marsham is a small village situation 10 miles north of Norwich, and in 1831 the population was 624. The village inhabitants worked in handweaving, and later in the manufacture of worsted and bombazine fabrics. Marsham is called ‘Marsam’ in the Domesday Book of 1086. This Old English name means ‘homestead or village by the marsh’.

At the age of 21, on 10 January 1601 Robert married Anne Gyles at the church of St Michael at Plea in Norwich. There is a baptism for an Anne Gyles in 1581, father William  in Topcroft, Norfolk (13 miles south of Norwich) which may be for her.

Robert and Anne had a large family of 11 children. The children were all baptised at St Peter Mancroft, Norwich.

In 1603 Robert was admitted to the Norwich Freeman, working as a cordwainer (shoemaker) granting him the right to practise his craft and business in Norwich.

Cordwainers are shoemakers, originally highly skilled craftsmen who used the finest goatskin leather from Cordoba in Spain. The Company’s roots date back to 1272, and the first Charter in 1439 licensed Cordwainers to control the shoe trade within the City of London.

Those who paid taxes in Norwich were eligible for freeman status, and to trade freely in the city, membership was essential. Candidates could obtain admission in three ways – by patrimony – father to son (if the father was a freeman), by apprenticeship with a freeman and by purchase (payment of a fee after they had practised their craft in the city for a year and a day).

Robert’s wife Ann died in June 1643 and on 8 June was buried at St Peter Mancroft, with the burial register noting she was the wife of Robert Vowte. 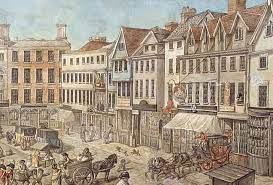 It seems Robert had other business interests, and in 1645 he became the licensee of the “Angel Inn” in the parish of St Peter Mancroft in Norwich. The Angel was situated at 16 Market Place, Gentleman’s Walk in Norwich. Later its name was changed to The Royal Hotel. At its peak, the Angel was arguably the most popular of four coaching inns along Gentleman’s Walk, with the King’s Head, Star Inn and White Swan also nearby. Today, shoppers and visitors heading to Royal Arcade may spot, high above the stained glass window, the bust of an angel.

In 1650 there was a family dispute between Robert and his son in law Elias Browne, husband of his daughter Anne. The subject was the property in St Peter Mancroft.

Robert died two years later in October 1652, and he was buried on 19 October at St Peter Mancroft, with the burial registers still describing his occupation as Cordwainer. It is unknown when his wife Alice died.

His will in 1653 is mentioned in very lengthy Chancery records when Elias and Anne Browne and other defendants were accused of trying to defraud Ward and other creditors of Robert Voute by fraudulently conveying his messuage (property) called ‘The Angel’ Inn. Five of his surviving children are also mentioned in the document as defendants –