Margaret Agnew was born in 1820 in Belfast, Northern Ireland, the daughter of James Agnew.

At the age of 18 she was convicted of larceny (theft) and sentenced to transportation for seven years across the seas. (Australian Convict Transportation Registers).

Margaret, a housemaid, was charged on 9 January 1838 in the Court of Justice in Glasgow, Scotland with stealing a chest of plums.

Her criminal report mentions that she had been charged with theft three times previously in Dumbarton, Scotland (14 miles from Glasgow).

Margaret left Woolwich, Kent, England on 25 April 1838 aboard the convict transport ship “Nautilus” and arrived in Tasmania on 29 August 1838.

The “Nautilus” ship was built in Shields, Durham in 1833. She carried 132 female convicts to Australia on her voyage in 1838.

Aboard the ship she appears on the “Nautilus” Sick List for Female Convicts, as aged 17, received from Glasgow, health amenorrhoea (an absence of periods), months in prison-8. 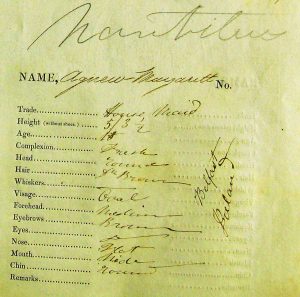 After arrival Margaret was confined in the Female Factory in Launceston, and was convicted a few times for being absent without leave.

The Convict Muster records show she was then assigned to work for Mr A Langmead of Launceston in 1841.

She was also sent out to work for Mr Henry Clayton as a housemaid on Norfolk Plains, about 26 kms south of Launceston.

Margaret obtained her Ticket of Leave on 26 July 1843, with notice of her new found freedom appearing in the local newspapers.

In 1842 Margaret was sent to work in the service of Mr John Jones, West Tamar. She was charged with absconding from his residence on 25 July 1842. (VDL Abscondings 1802-1853 Tasmanian Archives).

She was returned to the Female Factory, but was captured again after absconding on 18 August 1846.

Henry was a convict from Leeds, in Yorkshire, convicted of housebreaking in York on 27 August 1832, found guilty, and he was sentenced to death.

His sentence was commuted to life transportation and he arrived in Tasmania on the “John” in December 1833.

Before Margaret and Henry were allowed to marry, they needed to apply for Permission to Marry from the Governor which they did, and it was approved on 17 May 1844.

Neither Henry or Margaret could write, given they signed their mark with an ‘x’. Their witnesses John and Mary Wilson did likewise. 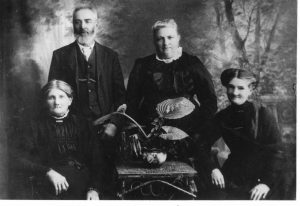 In 1846 Margaret obtained her Certificate of Freedom, allowing her to move around the colony of Australia, and travel interstate.

Sometime between 1850 and 1853, after the birth of their first son George, they sailed to Melbourne, Victoria.

Their daughter Margaret was born in Benalla in 1853, but Henry and Margaret decided to make Violet Town their home, and in June 1857, Henry Aldridge, residing in Tulip Street, a bushman, appears in a survey of the town by Mrs Hoskins of the Violet Town General Store).

It appears while Henry was off working around the district as a labourer, wood splitter and bushman, Margaret may have been living in Violet Town, getting herself in and out of trouble. She appears several times over the next few years at the Violet Town Police Court. 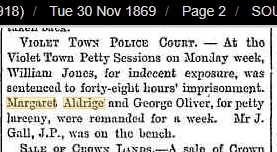 30 November 1869 – Margaret Aldridge and George Oliver were convicted of petty larceny, and were remanded for a week.  (Ovens and Murray Advertiser 30 Nov 1869).

In 1875 Margaret appears in the Victorian Police Gazette, in the section entitled Prisoners reported as discharged from Penal Establishments during the week ended 6 September 1875. It provides the following information – 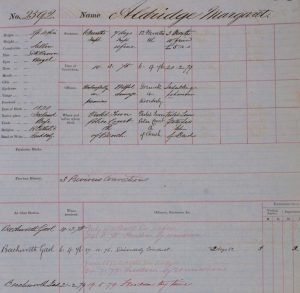 16 November 1875 – Margaret Aldridge, better known as Violet Town Mag, for being drunk and disorderly, was let off with a caution, and 63 6d costs. (Ovens and Murray Advertiser). 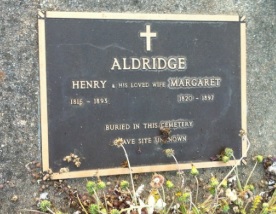 They were both buried in the Violet Town Cemetery in an unknown location, but this plaque marks their burial in the cemetery. 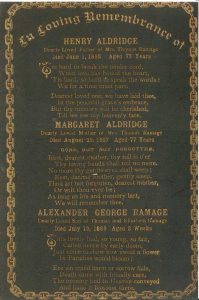