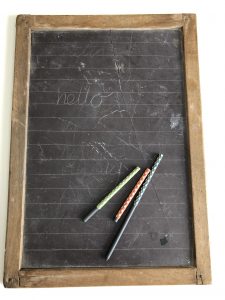 As settling on land increased in the Boho area, so did the population. The area was described in a local newspaper in 1887 – “What was forest some half dozen years ago, is now fenced in and neat little cottages can be seen in all directions. Three new schools have been opened within twelve miles of each other. Five Mile Creek, Warrenbayne West and Boho East.”

In 1885 the Boho East residents met together in a local church and with Mr L Johnson leading them, made strong representations to the Education Department, bringing under the notice of the authorities, that their children were growing up without an education.

There being no convenient building to house the children, early settler Mr Martin Pascoe, of Crown Allotment 17 in the Parish of Boho, offered one acre of his land for school use in November 1886. The following February, the Education Department accepted Mr Pascoe’s generous offer, and the land was gazetted in March 1887 on the south east corner of CA 17.

A report was prepared by the District Inspector who approved the building and recommended the establishment of a school at the property. The Department leased this building for 15 pounds per annum for use as a school. Boho East State School officially opened in this building on 1 Jan 1887 with Miss Jane Irwin lately from Malmsbury, as Head Teacher. 34 children were enrolled at the school.

The locals came together and formally celebrated the opening of their new community resource with a successful afternoon tea and public meeting. The tea was provided by local settler’s Mesdames Pascoe, Mitchell, Footter, Bickerton, White, Johnson and James. Speeches were delivered by the Rev Abraham Isaac and Messrs Gibbons, Pascoe and Mitchell.

The community celebrated in a variety of ways, and in May 1891 an annual picnic was held with some of the married ladies providing the food. Many children and adults were present including Mr Johnson, Miss Neeren and Mr Pascoe.

As settlers moved away from the area, enrolments continued to decline, and the school was closed by the Department permanently on 23 Jan 1894.

It took until October 1988 for the Ministry of Education to consider disposing of the one-acre Boho East State School site.