Charles Henry Cohen Pickering was born on 22 September 1855 in Bankstown, NSW, Australia to parents Henry Pickering (1827-1893) and Mary Jane Ann Meredith (1833-1911). Henry was  described as a labourer in Bankstown, Sydney. 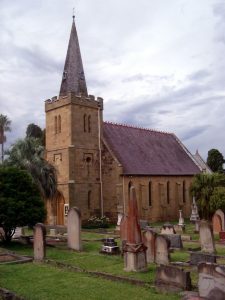 Charles was baptised at St Thomas, Enfield, NSW on 18 November 1855. He was one of eleven children born to the couple.

Charles second names are interesting. The name ‘Henry’ is obviously for his father, but it took me a while to figure out where ‘Cohen’ came from, until I read Henry’s death certificate. His father’s Christian name is given as ‘Cohen’ which was actually Gowan!

Three years later by April 1858 the family had moved to Waverley,  and at the time of Charles’ sister Mary’s birth he described himself as a timber dealer.

Several other siblings were born in the area, with their birth’s registered in the Paddington area.

By 1871 and his brother Horatio’s birth, the family were living in West Maitland, 160kms north of Sydney, and father Henry’s occupation was described as a joiner.

Two years later in 1873 at the birth of his sister Lucy, the family had moved to Gulgong, 250kms inland west of Maitland. 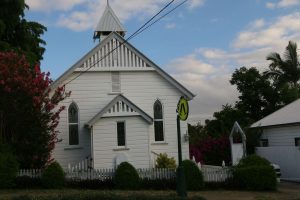 Charles, a carpenter may have returned to Sydney earlier, perhaps for work, because on the 24th June 1879 he married Mary Milverton at the Primitive Methodist Chapel in 234 Given Terrace, Paddington, Sydney.

They both gave their residence as 4 Willow Terrace, Sussex Street in Sydney. The church had only opened two years previously in March 1877.

The Sussex Street terrace houses were heritage listed, and in the Sydney central business district, but unfortunately in 2016 they were demolished to make way for the Hyatt Regency, and all that remains now is a heritage marker. 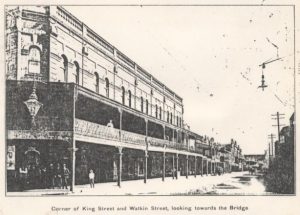 Daniel was a London tailor who had arrived in the colony in 1854. He also had land, and stated he was a farmer on Mary’s birth certificate. Mary was one of nine children born to the couple. 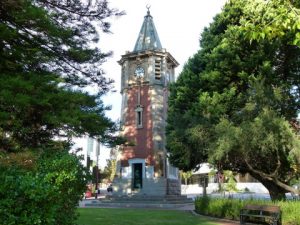 Charles and Mary’s first child Harry, on his WW1 enlistment papers state he was born in 1877 in Newtown, Sydney.

Strangely his birth wasn’t registered until two years later in 1879 in Patricks Plain (now Singleton), NSW which is 200 kms north of Sydney. Given that Charles and Mary were married in June that year, it appears Harry may have been born illegitimately.

Harry enlisted in the AIF 5th Australian Pioneers Battalion in 1916, leaving Freemantle on board ‘HMAT A16 Port Melbourne’ on 30 October 1916. He was killed in action in Belgium on 14 September 1917 at the age of 38 and is his memorial is at panel 31, Ypres (Menin Gate), Flanders in Belgium. He left behind a wife Elizabeth and five children. He is also remembered on the Subiaco Fallen Soldiers Memorial.

Sadly Albert was killed in action on 20 September 1917 at Polygon Wood, Belgium. He is remembered on the Yypres Menin Gate, panel 23. Emily and Albert and one child – William Milverton Edmends (1909-1990).

Son Percy married Annie McNamara in 1912 and had two children – Joy and John. Annie died in 1942, and Percy remarried Daphne Clark in 1950. A notice appeared in the Sunday Times Perth in 1923 stating Percy and his wife of Churchill Ave, Subiaco were having an enjoyable time in Sydney before they were going on to America. Percy’s son Raymond served in the RAAF in WW2.  Percy died in 1967 in Penrith, NSW aged 82.

Daughter Myra married Isaac John (Jack) T Jackson in 1907 in Subiaco. They had one daughter Jean Milverton Jackson in 1907, but she died in 1908. I haven’t been able to find out where Myra died. 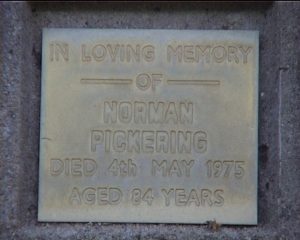 Son Norman married Beatrice Atwell in 1922 in Perth. They had one child – Raymond.

Norman served in the Citizen Military Forces in Perth, and died in 1975 in Perth aged 84.

He is buried in Karrakatta Cemetery with Beatrice who died in 1975 at EC section, Garden 10, 87. 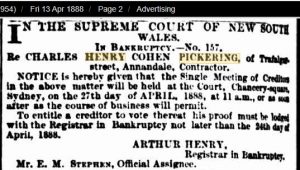 In 1888 Charles, a building contractor filed for bankruptcy while he was living in Annandale, an inner Sydney suburb.

He had moved to Petersham when their son Norman was born, and was living at Old Canterbury Rd there in the 1893 Sydney trade directory.

Charles and Mary were living in Leaderville, West Australia when Charles died at the age of 50 on 24 July 1906. 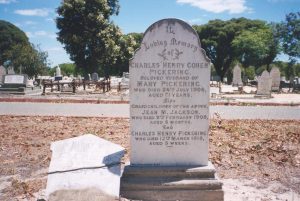 He is buried in the Wesleyan Section of Karrakatta Cemetery, Section CA 0328. Also buried with them are his two grandchildren Jean Jackson, daughter of Myra (d 1908 aged six months) and Charles Henry Pickering, son of Harry (d 1910 aged 5 weeks).

I’ve been unable to find Mary’s death in either Perth or Sydney.