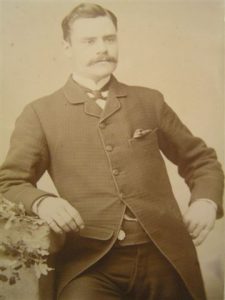 His father Charles was a home/house agent born in Exeter in Devonshire, England, and his mother was from Cork in Ireland.

Alfred was the last child of seven children born to the couple.

He was baptised at St Peters, Eastern Hill, Melbourne on 6 June 1862, his home residence given as East Collingwood. 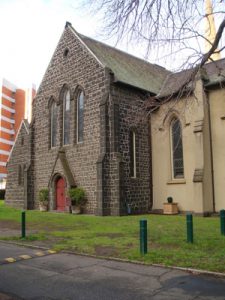 The parish church dates from 1847. The letters patent of Queen Victoria declaring the city status of Melbourne were read on the steps of St Peter’s in 1848.

Sadly Alfred’s father died of phthisis (tuberculosis) after suffering with it for a year, when he was just 10 years of age in 1873. The family were then living at 18 Dorset Street in Collingwood.

His mother Eliza Hutton was left to raise six boys on her own. His oldest brother William had died aged 10 in 1858 four years before Alfred was born. 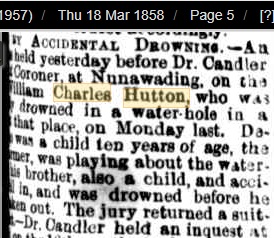 William had accidentally drowned when the children were playing together in a fenced off 14 foot round waterhole in their fathers farm paddock at Nunawading.

His brother Pierce gave a statement at the coroners inquest in which he saw his brother lose his footing and slip under the water.

After the death of his father the family moved to 18 Dorset Street, Collingwood in 1874. 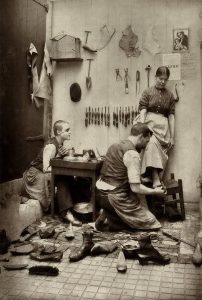 They appear in the rates books living in house there for many years. The street has since been demolished and rebuilt with brick factories.

Alfred was a bootmaker living and working in Collingwood. In 1880 he appeared in the Carlton Petty Sessions Court putting in a complaint about wages against William Millson, but the dispute was settled privately.

In 1887 Alfred Hutton, bootmaker, appears in the rate books in Forest Street, Collingwood (west side) renting a brick house and land from Mr Henry Young. 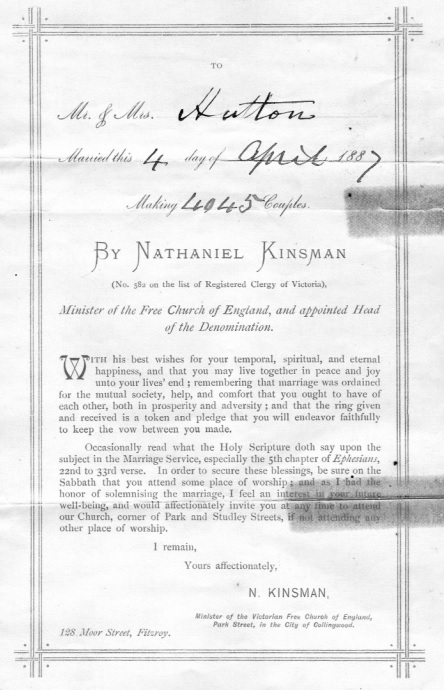 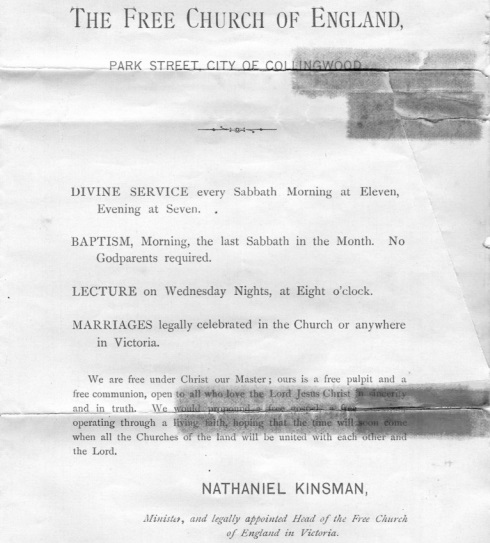 Asenath Clara Jennings was born illegitimately on 28 August 1863 in the Melbourne Lying In Hospital in North Melbourne to parents Asenath Hall Jennings (1835-1912) and George Cranston Robson (1843-1894). Her father is confirmed by DNA. 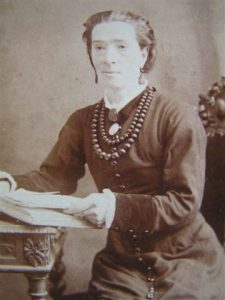 The baptism register states she is the illegitimate daughter of George Robson, labourer of Upper Plenty and Asenath Hall Jennings.

Asenath was one of four known children of her mother, but all but one sister Mary Jane Jennings (1870-1953) survived childhood.

Alfred and his wife Asenath, known by her second name of Clara – had six children – 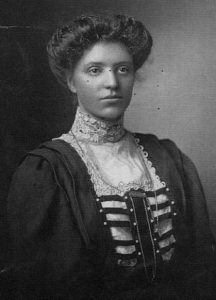 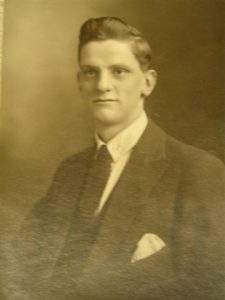 From 1892 in the Sands and McDougall Melbourne Directory Alfred is living at 29 Bendigo Street, Collingwood.

Alfred died on 29 November 1903 at 29 Bendigo Street, Collingwood. He is buried in the General Melbourne Cemetery with no headstone in the Church of England section, GG 2004.

In his probate he leaves the house at Bendigo Street, to his wife Asenath and six children. 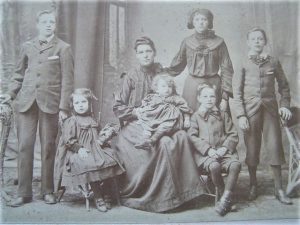 After the loss of her husband in 1903 Asenath Clara was in quite desperate circumstances. Her boys were in and out of the petty sessions courts for minor offences. Perhaps because of this in 1911 her son Ernest was placed aboard the ‘John Murray Training Ship’ with tragic consequences.

The Victorian Government commissioned the ‘John Murray Training Ship’ for formative training purposes for juvenile offenders from 1910 until 1918. It aimed to train seamen for the navy and merchant navy. It ceased operations in controversial circumstances in 1918. 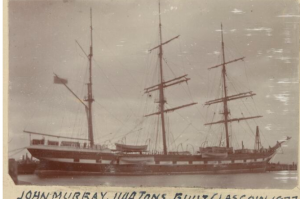 Between the commissioning and abandonment of the enterprise, 411 boys passed through the ship. The John Murray was dogged by misadventure and controversy. Allegations of ‘unnatural practices’ brought an odium on the ship which a Police Magistrate’s inquiry in 1911 and a royal commission in 1915 were not able to dispel entirely.

What was meant to be an institution for the formative training of juvenile offenders soon became a political and financial embarrassment. Established to train seamen for the navy and the merchant service, discipline was harsh and desertion rife. Fewer than one boy in five completed his training and joined other ships.

It seems Clara was trying to have her son removed from the ship, as he was ill, and wanted to leave, and she had even written to her local parliamentary member to engage his help to do so just days before he drowned. The ship hit the bay steamer the “Hygeia” near the Port Melbourne Railway Pier, and capsized, throwing 8 boys into the water on December 11. All the boys were saved except Ernest, who couldn’t be found in the choppy sea conditions until the following day. 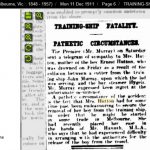 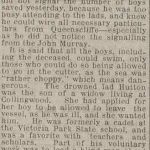 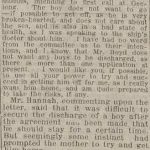 An inquest was conducted into the tragedy starting on 29th December 1911. The inquest went for several days and finally Captain Maitland of the Hygeia was found guilty of manslaughter of Ernest Hutton on Monday 8th January 1912, and committed for trial. He was master in charge of the Hygeia and it was due to his negligence the accident occurred. Witnesses at the trial (night watchman at the Sailors Home) testified the captain was very drunk the night before, and was still seedy at 7am the next morning.

On February 2, the case went to court, and the Crown prosecutor announced to Judge Eagleson that no presentment had been filed by the Crown, so the case was removed from the days proceedings. The captain was therefore acquitted. I can’t imagine the grief of the family. 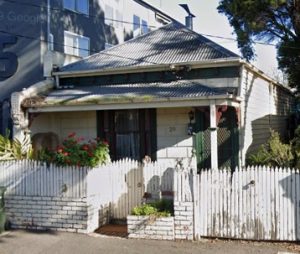 Asenath Clara continued to live at 39 Bendigo Street, Collingwood until her death with her unmarried daughter Edith.

She was buried in the General Melbourne Cemetery with her husband, listed under ‘Clara Hutton’ and has no headstone.

Daughter Edith was finally free to marry, aged 29, which she did in 1929 to George Patterson. 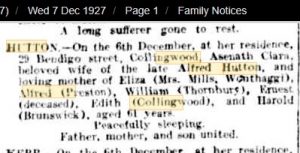