John Patrick Gallagher was born on 10 July 1870 in the townland of Derrybehagh, 2kms from the village of Feakle, County Clare, Ireland.

Derrybehah is a small townland of 65 acres in the parish of Feakle, Union of Scarriff, Barony of Tulla Upper, County of Clare, Province of Munster, Ireland.

John was baptised the following day on 11 July at the Roman Catholic Church in Feakle.

John helped his father on the farm and according to his daughter Doris, John was employed as a ‘moonlighter’ running messages for the IRA, as a 12 year old child. 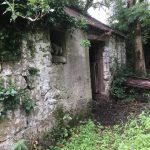 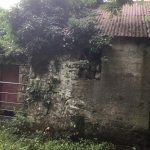 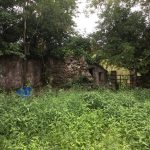 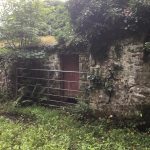 According to his daughter Doris, John’s mother Bridget died when he was a young child, and he was the raised by his grandmother. His paternal grandmother Mary Fennessy died in 1879, so this may have been Catherine ‘Kitty’ Gallagher nee Fennessy, his mother Bridget’s mother.

At the age of 20 John decided to leave his Irish homeland behind and immigrated to Australia aboard the passenger ship “Tara” arriving in Rockhampton, Queensland on 1st April 1891.

The “Tara”carried 395 passengers, and the voyage took 75 days. John was described as a 2o year old farmer’s labourer from Ireland.

John landed in Rockhampton, Queensland, and worked in the Mount Morgan Mines before travelling to Sydney and living with his sister Mary and husband for a while.

The historic streetscape of Quay Street still displays a number of substantial historic buildings, built when Rockhampton was envisaged as being capital of a state of North Queensland. Most prominent of these is the sandstone Customs House (1900), which today houses an information centre. Other important 19th-century buildings include the Post Office (1892), the Supreme Court House (1888), and St Joseph’s Cathedral (1892).

Mount Morgan is located 32 km south-west of Rockhampton in Central Queensland. It was founded as a gold mining town in 1882 with its mining operations continuing until November 1990.

Mount Morgan Mine was the largest gold mine in Queensland in the 19th and early 20th centuries. About 250 tonnes of gold and 360,000 tonnes of copper were extracted from the mine, and about 134 million tonnes of waste rock and tailings generated.

At its peak, the town that grew up around the mine had a population of 15,000 people, a great many of them Irish labourers like John.

After a few years working at the mines, John headed down to Sydney, where his sister Mary was living. Mary had immigrated three years before John in 1879 into Sydney aboard the “Samuel Plimsoll” Mary aged 17. She married Edmond Wareham, a native from Feakle Ireland like herself, in 1882. John stayed with them for a while, before making his way down to the Korumburra and Bena area of Gippsland, Victoria.

In Korumburra, John worked as a farmhand, breaking in horses for local farmers, and  acting as an unofficial vet in the district. 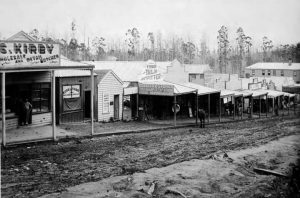 Korumburra, a rural town in west Gippsland’s Strzelecki Ranges, is 105 km south-east of Melbourne and 33 km south of Warragul. In the early years of the dairy industry there were factories at Bena, Poowong and Kongwak. In 1901 a factory was opened at Korumburra and it had a life of 70 years. 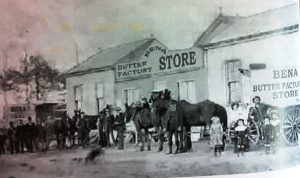 Bena is a rural village in south Gippsland, 100 km south-east of Melbourne and 8 km before Korumburra. Agricultural pursuits became important around, Bena, particularly dairying. A butter factory was proposed by R.J. Fuller in 1892, and it opened for business the following year.

John appeared in the local newspaper, living at Bena in April 1902. The newspaper stated that Mr John Gallagher pleaded guilty to assaulting Kenneth McLaughlin at Bena on 16th Apr 1902. The claimant claimed he was beaten when he was asleep with no provocation. The defendant, our John, claimed he was drunk.

In 1905 the electoral roll records state he was working as a farm labourer in Bena. The population in the town in 1911 was 345. 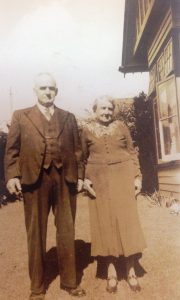 Elizabeth had given birth to an illegitimate child Thelma Prideaux in South Melbourne in September 1904 (father’s name unknown on her birth registration).

Elizabeth was also six months pregnant with John’s child who would be born in February 1907, Mary. This is most likely why they were married at the minister’s house (parsonage), instead of in the church.

Elizabeth was born on 30 June 1874 in Sandhurst (Bendigo) to Cornish mining parents George Prideaux (1823-1878) and Phillipa Simmons (1827-1906). Elizabeth was the youngest of nine children, the firstborn Stephen being born on the voyage out to South Australia in 1849 aboard the immigrant passenger ship “Childe Harold”.

Elizabeth spent her first few years in Bendigo with her parents, and then as a young lady moved to South Melbourne, where she gave birth to her first child, Thelma in 1904, father unknown. Sometime in the next two years, she had moved down to Bena, where she met and married John in 1906.

Three of her siblings can also be found residing in Korumburra, Victoria –

After their marriage, John and Elizabeth lived in Bena for several years, with John working as a labourer around the area and also at the Bena Butter Factory. The girls attended St Joseph’s Convent School in Korumburra. 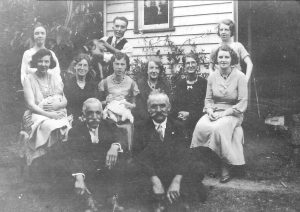 John Gallagher and his family

The family lived in William Street, Korumburra where Doris was born in 1915 later moving to Victoria Street where they were residing in 1919 in the Victorian Electoral Roll until 1924. 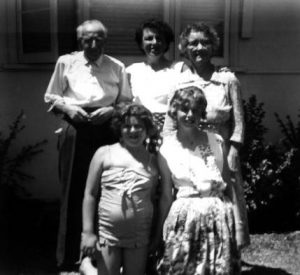 In 1925 John and Elizabeth were living at 11 Albert Crescent in Surrey Hills, Melbourne.

By 1926 the family had moved to 20 Golding Street, Canterbury, where John was still working as a labourer.  He spent some years working for the Melbourne City Council. By 1936 their son John was listed as a tinsmith. (Electoral Roll).

The family continued to live in Golding Street, and Elizabeth died there on 11 June 1947 aged 72. 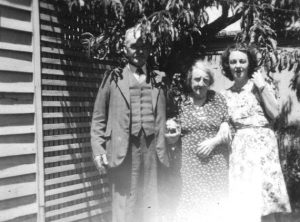