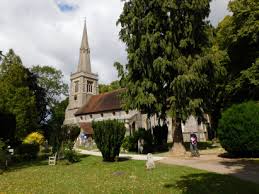 Bennett was baptised on 1 January 1595 at St Mary’s parish church in Princes Risborough.

He was a bonelace buyer by trade (see below).

Bennett Britnell married three times, and the first time was at the age of 25 years to Jane Horne. They were married on 25 April 1619 at Radnage, Buckinghamshire. (Bishops Transcript, Buckinghamshire Marriage Index).

Unfortunately Jane died a few months later in November 1620, and was buried at the parish church in Radnage on 2 November 1620 (possibly in childbirth)?

Four years later Bennett married again, when aged 30, to Elizabeth Allen on 24 May 1624 at St Andrews, Chinnor, Oxfordshire. Despite being in different counties, Radnage and Chinnor are only three miles apart.

Elizabeth was the daughter of John and Margaret Allen of Stokenchurch. John was a carpenter.

Bennett and Elizabeth had two children, but only one survived infanthood –

The will of John Allen of Stokenchurch, Oxfordshire (Elizabeth’s father), 23 June 1630, was proved at the Prerogative Court of Canterbury in London 6 July 1630.  He left £30 to his grandson Christopher. Bennett Britnell was executor of the will.

Less than six months later, Bennett married for the third and final time to my 10 x great grandmother Frances Toovye at St Andrews Chinnor on 28 April 1628.

Bennett and Frances had three children –

Bennett Britnell was a yeoman farmer of Chinnor, a village and a parish in Oxfordshire. The village stands on the verge of the county, under the Chiltern Hills, five miles south east of Thame. The population in 1894 was 1247.

Bennett Britnell’s will written on 10 May 1634, described him as a bonelace buyer, and was “sick of body, but sound of mind”, when he wrote it. He died three days later.

Bonelace is an intricate handmade lace made by interlacing thread around notched pins stuck into a pillow, also called pillow lace. (www.thefreedictionary.com) 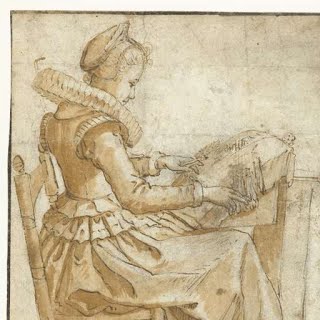 lace making on a pillow

Lacemaking was a large cottage industry in the surrounding villages. Women and children from the age of five were engaged in lacemaking to make ends meet.

This was piece-work performed in the home and controlled by Lace Merchants who sold the output in London.

A hundred years later, by 1803 Chinnor had a school of industry that taught lace-making and sewing. In 1815 there were three schools teaching girls to make lace, which became an important local industry.

Bennett was bequeathed some money in trust from his father in law John Allen of Stokenchurch. He left the following bequests in his will in 1634 –

The witnesses were Richard Meade and William Goldsmith, and the will was probated on 14 June 1634 London.

After her husband Bennett’s death, at the age of only 35 years, Frances remarried on 22 July 1639 at Chinnor to Richard East.

Richard East was born in 1615 and baptised in nearby Crowell on 27 December 1615, the son of Henry East.

Frances East died in May 1660 at Radnage, Buckinghamshire and was buried there on 24 May 1660.