Albert John Jackson was born in 1883 in Fitzroy to parents Lawrence Jackson (1850-1916) and Mahalia Mead (1857-1885). After his mother’s death in 1885, he was informally adopted and raised by fellow Fitzroy residents and friends of the family, Esther & Charles Wentworth.

Sadly, Albert’s mother Mahalia, had died in childbirth with twin girls, when he and his twin brother Arthur were only two years old. Older sister Sarah was four and older brother Robert was six.

So when the four surviving children found themselves without parents in 1888 in Fitzroy, local childless couple Esther and Charles Wentworth (most likely church friends) took Albert in to raise as their own. Albert was to never see his biological father again. 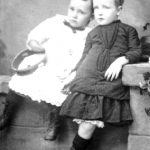 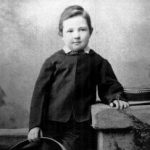 Albert’s twin brother Arthur, and Robert were raised by their mother’s sister Elizabeth Mead and husband Ernest Pateman. They immigrated to New Zealand in 1898 aboard the passenger ship “Elingamite”. Elizabeth and Ernest then went on to have 10 children of their own! The boys never returned to Australia.

Aunties Frances (Fanny) and Martha (Dolly) were living together and brought Sarah up. Auntie Esther (Tilly) is also mentioned in the following memorial. Sarah is buried with her baby twin sisters and mother in the General Melbourne Cemetery. 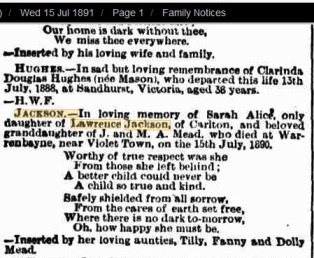 So after all this sadness, Charles Wentworth selected land and moved his new family to Baddaginnie, near Sydney Road (now known as the Hume Highway) in Victoria in 1886.

Albert was known as both John and Jack by the family. In November 1902 a notice appeared in the local paper announcing a new Creamery had been built in Baddaginnie. (Benalla Standard).

It mentions Albert’s promotion from first assistant to Creamery Manager. According to a letter from the Baddaginnie Butter, Cheese and Ice Factory dated Jan 1908, Albert had been working for the company for eight years, starting work there when he was 17.

The Boho Creamery opened in November 1895, and was called “The Lady Brassey”, after the Victorian Governor’s wife.

In 1907, in Violet Town, he married his cousin (non-biological) and childhood playmate, Kate Miles, and for the first few years lived in Baddaginnie near the Railway Station.

They had three children, Horace in 1908, Ella in 1909 and Rex in 1921 who all attended Bourke’s Hill primary school, and later Boho State School.

In 1909 Albert  gained his factory engine driver’s license from the Department of Mines and Water Supply (Butter Factory documents dated 1907, 1908 and 1909).

In 1908 Albert Jackson of Baddaginnie’s application for a Crown Lease was approved for 18 acres in Boho (Benalla Standard 15 May 1908). By 1913 they had moved and lived in a house called “Thirlmere” on a Boho property known as “Grants”.

In January 1914, an advertisement appeared in the paper (Benalla Standard) offering for sale the Baddaginnie Butter Factory as a going concern, which instructions to sell by public auction the whole of the company’s land, buildings and machinery. It was bought by the J Dunlop family in November 1914, but it seems they couldn’t make it pay and by 1915 the liquidators moved in and sold everything. 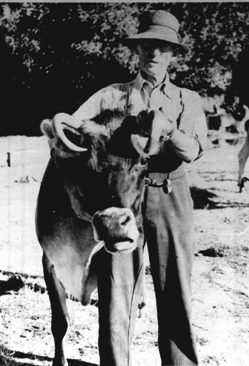 So with the closure of the creamery, Albert was forced to take up farming to support his family. By 1914 Albert was working as a farmer at Boho and living at “Thirlmere” (Vic Electoral Roll).

In 1925 it was reported in the Benalla Standard that Mr A J Jackson of Boho had the misfortune to lose several valuable ewes through being run over by a train. Their value was stated as being 15 pounds. 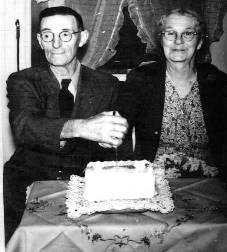 Albert and Kate on Wedding Anniversary

In 1932 Albert & Kate’s silver wedding anniversary notice was celebrated in the Argus newspaper, giving their present address as ‘Brookville’, Boho.

Sadly Albert was never to see his twin brother Arthur or older brother Robert again. In 1958 he made a will leaving his daughter Ella 400 pounds, and his property divided between his two sons Rex and Horace.

Esther Wentworth (Albert’s adoptive mother), died in 1919 in Baddaginnie, and in her will despite her husband still being alive, left all her property to Albert’s son Horace Jackson.

Albert died at Boho from a heart attack at the age of 81 in 1964. He is buried with his wife Kate in the Violet Town Cemetery. Kate died in 1975.