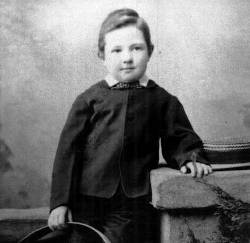 Robert Jackson was born in Fitzroy in 1879 to parents Laurence Jackson and Mahalia Mead. He was baptised locally at St Marks, and then at some time went to live in Benalla, Victoria (according to his 1909 New Zealand marriage announcement in the local newspaper).

In 1898 he immigrated with his younger brother Arthur and auntie Elizabeth Mead (who had married Ernest Pateman) to Auckland, New Zealand.

He married on 9 June 1909 to Ethel Llewelyn at the home of his auntie Mrs Pateman in Parnell, Auckland, New Zealand. Ethel was the daughter of Isaac Llewelyn of Maldon, Victoria. Robert’s occupation is given as a bread carter, and labourer.

Ethel’s brother John (Jack) Llewelyn married Ellen (Nell) White in 1898 in Violet Town, Victoria. Nell was a sister to Harriet Miles nee White – mother to Kate Jackson. So it appears the Jackson and Llewlyn families knew each other before Robert and Ethel immigrated to New Zealand, separately.

A sensational newspaper article just two years later in 1911 tells the story of a  sad incident when his 28 year old wife Ethel committed suicide by drinking poison, leaving a suicide note explaining why…. 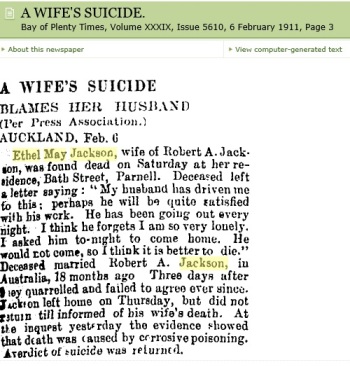 The death also made the Melbourne papers in The Age and the Weekly Times entitled ‘An Unhappy Marriage’.

It seems no suspicion fell on Robert and he was never charged with her death, and perhaps to make a new start, he moved to the Hawkes Bay area of New Zealand.