William Morgan was born on 20 February 1764 in Hopesay, Shropshire, England. He was baptised on 10 June 1764 in Bromfield, Shropshire. He was the son of William and Elizabeth Morgan.

William worked as a wheelwright and carpenter in the village of Hopesay. He married Mary ‘Molly’ Jones on 25 June 1785 at Diddlebury, Shropshire.

Mary was born in 1762 in Diddlebury,  the daughter of David Jones, ratcatcher and labourer and Margaret Powell. She was baptised at Diddlebury on 31 January 1762.

William and Mary had at least one legitimate child together – James Morgan baptised 19 March 1786 Diddlebury, Shropshire. James married Jane, and in 1851 was living in Wallsend, Northumberland, and was described as a Pensioner of Greenwich Hospital. 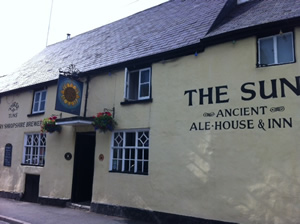 According to the book “Haunted Hostelries of Shropshire” by Andrew Homer, Molly worked at the Sun Inn, Corfton, Craven Arms. Molly already had an illegimate child by another man before marrying William in 1785.

In 1789 Molly and William were accused of stealing linen, hemp and yarn, worth more than two shillings from the Sun Inn.

William escaped with the help of some friends, but Molly was taken back to the Sun Inn and placed under lock and key in the cellar en route to the Shrewsbury Assizes. Knowing she may have been hanged for the offence, she slashed her wrists, but the local surgeon quickly sewed them up, before she was taken to Shrewsbury for trial.

Molly appeared on 8 August 1789 she was tried at the Shrewsbury Assizes for larceny and sentenced to transportation for seven years. She arrived at Botany Bay on the “Neptune” with the Second Fleet on 28 June 1790 and was sent to Parramatta to live. Apparently she was allowed to live with William. 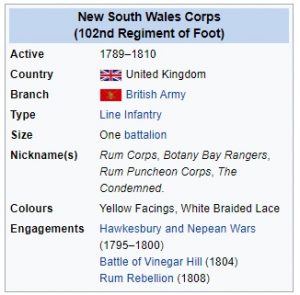 Meanwhile in England, William enlisted as a private in the NSW Corps in late Dec 1789 to avoid capture for his part in the crime at the Sun Inn. (A Colonial Regiment – New Sources Relating to the NSW Corps by Pamela Stratham).

Due to the remoteness and unpopularity of the posting, the New South Wales Corps were composed of officers on half pay, troublemakers, soldiers paroled from military prisons, and those with few prospects who were gambling on making a life for themselves in the new colony.

The added bonus was that William was sent out on the same ship as his convicted wife Molly – “The Neptune”, and was probably hoping to reunite with her in Australia.

The regiment began arriving as guards on the Second Fleet in 1790. The regiment, led by Major Francis Grose, consisted of three companies numbering about 300 men. It was disbanded in 1818.

Both William (as a free man) and Molly (as a convict) travelled to New South Wales on the very overcrowded ‘Neptune’, which left London on 17th January 1790. 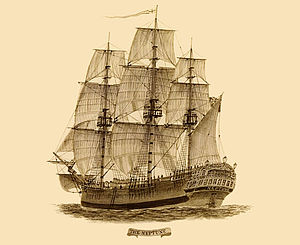 Neptune was a three-decker East Indiaman launched in 1780 at Deptford.  She made five voyages for the British East India Company, the last of these transporting convicts to Port Jackson as one of the vessels of the notorious Second Fleet.  This voyage resulted in a private law suit against the master and chief officer for wrongful death.

The regiment having arrived as guards on the Second Fleet, were under the command of Major Grose, who arrived in Sydney in 1792 to assume the role of Lieutenant-Governor of the Colony.

William was granted a discharge from the NSW Corps on 24 November 1794 (A Colonial Regiment – New Sources Relating to the NSW Corps by Pamela Stratham).

In Sydney Eleanor was joined by her husband William Morgan, and after she gained a ticket-of-leave, they opened a small shop in Parramatta.

On 9 November 1794, with the captain’s help, she escaped Australia in the store-ship “Resolution” with thirteen other convicts whose sentences had not expired. She returned to England and was reunited with her children.

A marriage record cannot be found for the couple, (William was still legally married to Molly), but they do baptise their children in the Anglican Church at St Phillips, Sydney and at St Johns at Parramatta.

In 1794 William was granted 25 acres of land at Port Jackson in Sydney –  3 land grants were made in Concord, Charles Westney and William Morgan, privates in the NSW Corps, received twenty five acres each. (A Colonial Regiment – New Sources Relating to the NSW Corps. Edited by Pamela Statham).

William and Eleanor had five children together –

William obtained more land at Concord, and the settlement date was 20 Feb 1796. 3 acres wheat, 12 acres maize off Govt stores. (NSW Muster Lists) and later in 1800 William had sold his grants and held a farm at Concord by purchase with 3 acres sown in wheat and 12 acres in maize. (The Second Fleet 1790 by Michael Flynn).

It seems William and Eleanor had a fiery relationship and 1798 Ellen took legal action to recover some pigs held by William which she claimed were her property. It was stated that they had recently separated after co-habituating for seven years.  By 1805 William was experiencing financial difficulty, and his effects were advertised for sale unless creditor claims could be met.  William then leased his farm to his stepson John Fraser. (The Second Fleet 1790 by Michael Flynn).

By 1814 William had sold all his land, and was working as a wheelwright in Windsor, and in 1819 was doing the same, employed by Mr John Blaxland.

The 1822NSW Musters have him working at Appin, NSW as a carpenter, and the 1825 muster he is now at Liverpool working as a carpenter.  The musters confirm that he came free on the vessel “Neptune”. 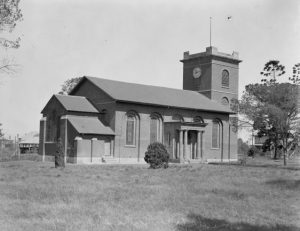 At the time of his death he was living with William Wilson, his son in law in Liverpool.

Meanwhile, back in England, Molly Jones Morgan was working as a dressmaker in Plymouth, where she bigamously married Thomas Mears, a brassfounder and bellhanger on 8 November 1797. I suppose she thought she would never see her legal husband William Morgan again.

In 1803 an apprentice at the bell foundry accused Molly of setting fire to her husband’s house. Her son John ran away to join the Royal Marines.

Molly escaped to London, but was arrested when a respectable widow, Elizabeth Jones of 15 Valentine Row, Blackfriars Road, reported she had found her petticoat and napkin in Molly’s possession, along with a stolen handkerchief. The Surrey Quarter Sessions record says she is the wife of George Mears a labourer.

Mary was committed on 20th of September, 1803, by magistrates R C Smith and J Bulcock esquires and was charged on the oath of Elizabeth Jones, with feloniously stealing, at St. George’s, Southwark, a shift, a petticoat, a napkin, and other articles, her property.

Molly was charged and tried at the Croydon Sessions, Surrey at Newington  on 10 October 1803 under the name Molly Mears, found guilty and once again was sentenced to transportation for 7 years to Australia. She gave her residence as St George the Martyr, Southwark, Surrey.

Molly arrived at Port Jackson for the second time on 24 June 1804 on the “Experiment“.  It is unknown if she tried to find her husband William who was living in Parramatta with new wife Ellen Redchester and their children.

Molly was sent to the Parramatta Female Factory, along with most of the women on the “Experiment” and was employed in spinning wool, sewing clothes and washing. She appears in the 1806 NSW Muster records working in the factory.

In 1814 it was discovered that Molly was branding Government cattle as her own, trying to increase her herd, and she was tried at the Criminal Court on 2nd April 1814. She was found guilty and sentenced to 7 years transportation to Newcastle.

Molly was then transferred from the gaol to the “Endeavour” to sail to the Newcastle Penal camp, known for its brutality, and a place for second offenders. Molly was now 53 years old, and took up residence with an officer.

In 1818 she was granted a ticket of leave by Governor Macquarie, and she was sent to help establish a settlement at Wallis Plains. She received land in her own right, on a peninsula of land called Horseshoe Bend, and with the help of convicts assigned to her, she cleared and cultivated the land and built a cottage there.

Stories are then that Molly opened a wine shanty in Maitland, which became increasingly profitable as the settlement grew and river navigation extended. On 5 March 1822 at Christchurch in Hoxham, Newcastle, she married Thomas Hunt, a young convict assigned to her, and over 30 years younger than herself. 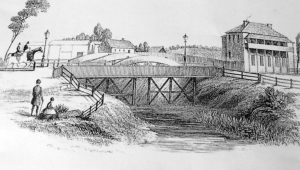 Thomas Hunt was convicted of Highway Robbery and sentenced to death which was commuted to transportation for life at the Old Bailey in London on 15 January 1812. He arrived in Australia aboard the convict ship “Fortune”. He was a brickmaker.

He is recorded on the list of prisoners sent to Newcastle on the ship “Endeavour” on 2 February 1814. Thomas Hunt received a conditional pardon on 6 April 1833.

In November 1823 Mary was granted a lease of 159 acres (64 ha). She bought 203 acres (82 ha) at Anvil Creek and built the Angel Inn in the centre of her lease, in Maitland. The inn was constructed of ironbark slabs and bark roof for the accommodation of the more respectable settlers. 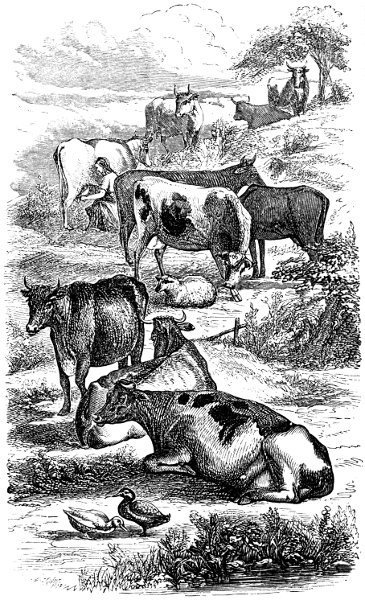 In 1825 Molly was affluent enough to write to the colonial secretary to say her land was not large enough for her stock of 303 head of horned cattle, 18 horses including 8 brood mares, and 100 sheep. She asked to be allowed purchase more land so she could increase her stock holdings.

The Australian, 23 January 1828, named her as one of the largest landholders on the Hunter River. Her land grants comprised 150 acres.

Her last years were spent in retirement at Anvil Creek where she died on 27 June 1835 at the age of 73 as Molly Hunt. She was buried on her property.

After Molly’s death,  Thomas “Joe” Hunt ended his days as a servant. He was thrown from a cart and killed while driving down a hill in Maitland. The coroners inquest reported a verdict of ‘accidental death’. 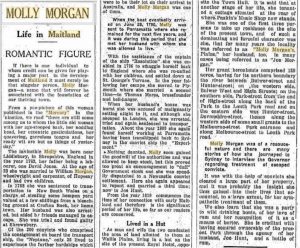 A terrific resource regarding William Morgan can be found  here on
Warwick Taylor’s family history website  and to read more about Molly her story appears  here on the Hunter Living Histories website.