Thomas Holbrook was born around 1760 in England.

It is believed that John was a butcher, or slaughterhouse owner in Trumpet Yard, 49 Whitechapel Road, Whitechapel.

John had two sons – Thomas (above) and William –

William Holbrook (brother of Thomas) who was born around 1740. William married Jane Painter on 28 September 1761 at St Dunstan’s Stepney.  After Jane’s death in 1774, he remarried Martha. They had two children – Martha (married Daniel Pratt) and Ann (married John Waugh)  both born in 1780. When Martha died in 1807, he married again to Ann Salmon on 15 July 1810 in Whitechapel. Ann died in 1826. 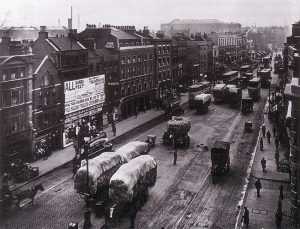 Whitechapel was the home of many industries like tanning, brewing, abattoirs and foundries. The people living nearby within the city of London, however, did not want these industries located within the walls.

They produced noxious smells and were often quite dangerous. Many sprang up in the East End in areas like Whitechapel, where they were close enough to service the rest of London, but not close enough to smell or see! 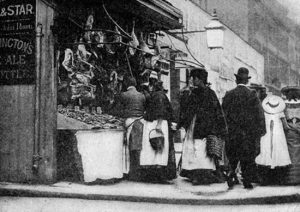 John Holbrook, (Thomas’s father), made a will in 1792 leaving property and goods to his daughter in law Dorothy Holbrook and her four children – Betty, Robert, John and Mary and two of his son William’s daughters Betty Morris and Anne Hill.

Thomas Holbrook married Dorothy around 1780 and had four known children.
(I have been unable to find their marriage).

Note – Roadside is right beside Trumpet Yard in the Land Tax record registers.

It is believed that Thomas died sometime before 1792 in Middlesex, London. 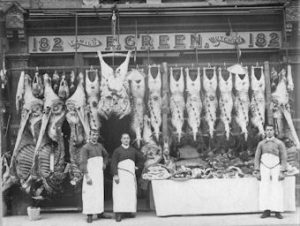 Thomas’s wife Dorothy was born around 1752 (from her age at burial). She lived in at Roadside, in St Mary Whitechapel after their marriage, and then in Trumpet Yard (49 Whitechapel Rd).

By 1794 Dorothy is appearing in the London Tax Records as being the occupier in Trumpet Yard, and her brother in law William Holbrook appears also as owning two houses and a slaughterhouse. They appear again in 1798.