Alexander Richey was most likely born around 1750 in Newry, County Down, Northern Ireland into a protestant family, the son of the Rev George Richey 1732-1771 and Elizabeth McCombe. Elizabeth was the daughter of a well known dissenting Presbyterian minister, the Rev Alexander McCombe 1705-1797.

He worked as a merchant in Newry, probably in the linen trade like his sons that were all involved in either the linen and woollen trades. 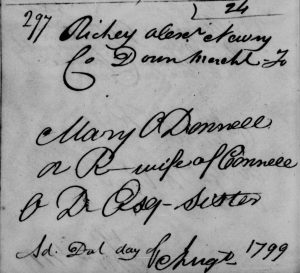 He appears in the Betham Genealogical Abstracts for Ireland, created by Irish herald Sir William Betham, whose notebooks are a substitute for some of the records lost in the 1922 Public Record Office fire in Dublin.

Andrew’s record states he is of Newry, Down, Northern Ireland, and in his will of 1799 his beneficiary was his sister Mary O’Donnell, the  “wife of Connell”. It appears his wife (name unknown) had predeceased him. 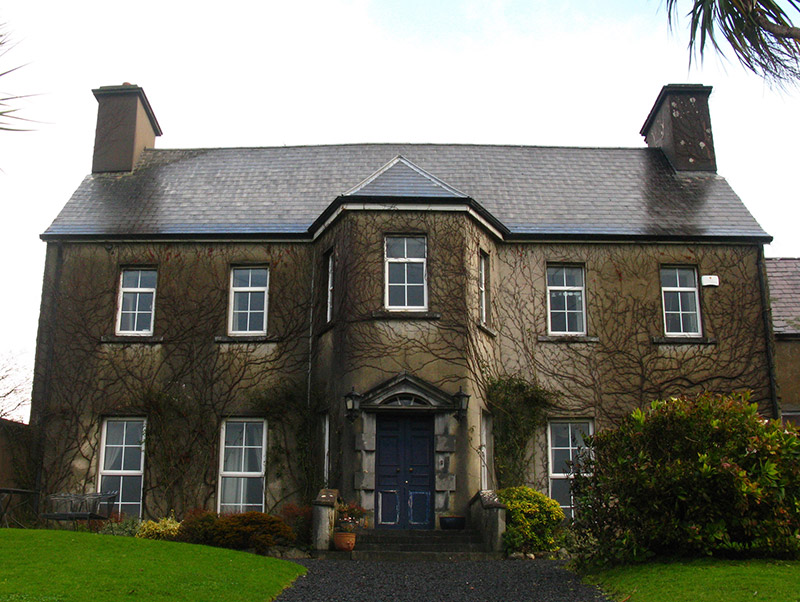 His sister Mary had in fact married into the well-known, wealthy, O’Donnell / O’Donel family of Newport, Mayo, Ireland.

The O’Donnell family and their wealth, spats, duels, and upsets were well documented in a thesis written about the family here.  Read about their duels, highway robbery and other exciting adventures in this well written blog about Neal O’Donnell here.

Alexander married and had five sons. It is possible his wife’s name was Catherine as there is a Court of Equity Bill record for an Alexander Richey, wife Catherine, against Lancell Boyd, dated 11 October 1770 in the Irish records. His known children were – 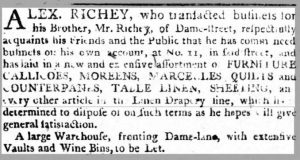 In 1810 he takes on a partner, but by 1817 he is back in business at 26 Lower Sackville St, linen draper. In 1827 he appears in the Landed Court Rentals (146 yer lease) for 40 Pemroke Road (previously Lower Baggot St). Alexander was also involved in supporting the building of an episcopal chapel in 1832 connection with the Asylum for Penitent Females, Upper Baggot St (where his nephew Rev R J C Richey would be chaplain).

In 1828 Alexander Richey of Bagot Street is mentioned in a marriage settlement document of Hugh O’Donnell (his aunt Mary’s family). He, and his unamed wife also appear in later 1831 documents pertaining to the debts of the O’Donel estate submitted to the Court of Chancery.

He was acting as an agent for the Earl of Charlemont (Sir Francis Caulfield – an Irish Representative peer and politician), residing at Donnycarney Rd, Mt Temple, Dublin in the Dublin Almanac of 1841.

2. William b 1771 Ireland, d 1848 Dublin. William was a silk merchant and tabinet mercer, operating out of 4 Hanover Street, and 11 Marks Alley, Dublin between 1812 and 1846. William first married Ann and had nine children, but they lost four as babies. Ann died in childbirth with the ninth in 18o7.

William then married Mary Ann Phillips in 1807 at St Nicholas Without, Dublin. In 1829 William spoke at a public meeting in Dublin, reported in the newspapers under “Distress in the Liberty of Dublin” regarding the present state of distress in the manufacturing districts of the city, in particular silks and other produce of the loom due to the free admission of foreign silks.

Admission into Freeman of Dublin City 1822

In Midsummer 1822 William, of Hanover Street, was admitted into the Freeman of Dublin City by grace.

William was a churchwarden and claimed an exemption from parish fees in 1841 because of his office. He was also appointed to a Special Jury Panel for 1844. His wife Mary died in 1845 and William died in 1848. They are both buried at St Lukes, Dublin.

3. Robert b 1779 Down, Northern Ireland d 1827 Dublin. Robert worked as a wholesale linen draper and woollen merchant at his premises at 91 Grafton Street and appears in the trade directories for quite a few years from 1801-1826. He also struggles with insolvency in 1824 and again in 1826. 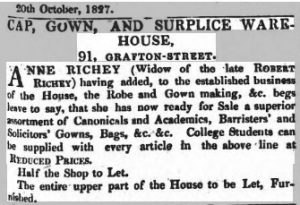 After Robert’s death his wife Anne, is advertising in the Dublin newspapers, goods for sale in October 1827 at his premises in Grafton St.

He died in Dawlish, Devon in 1880 aged 81 years. A large brass plaque speaking of his ministry most appraisingly appears in the St George Nympton, Devon church.

Alexander and Mary probably had daughters as well as the five sons listed above.

There is a Mary Richey, of St Michael, marrying a Robert Boyde of High St, carpenter on 18 May 1804 in Dublin (by license) at St Michael the Archangel, which is very possibly a sister of the boys listed above.

In 1790 Alexander Richey was in business with Robert Ker, in North Street, with a warehouse in Canal Quay, Newry. The grocery business sold items such as malt, soaps, sugar, flax, allum, shotgun powder, spices, mustard and tea. An advertisement was placed in the Belfast Newsletter (newspaper) advising that Robert Ker was giving up his share of the business with Mr Richey, in favour of his sons Robert junior and Moses. 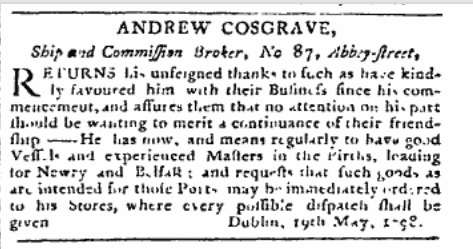 Robert Ker died in 1792, and in his beautifully detailed will he mentioned several of the Richey family including his wife Hannah, widow of James Richey (1740-1775), and their daughter Mary Richey (b 1768) who was the wife of Andrew Cosgrave (b 1763), a ships commission broker.

Also mentioned is Alexander Richey and his sister Mary Richey (1775-1840). James Richey was the uncle of Alexander, brother to his father Rev George Richey. 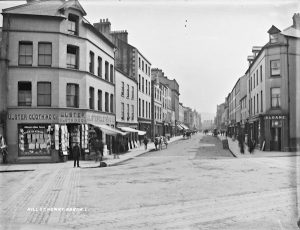 Alexander died in 1799 in Newry, Down, Northern Ireland. His name appears in the Irish Will Index for Newry for 1799.

In several other sources, including his father’s obituary, Alexander is noted to have drowned (perhaps with his wife, as it is also unknown when she died).

Unfortunately the wills were destroyed in the Great Fire in 1922 at the Public Record Office.

The partnership of Alexander Richey and Robert Kerr is again mentioned in the Belfast Newsletter on 19 July 1799, at the time of his death, and again in November 1799 asking their creditors to settle their accounts. 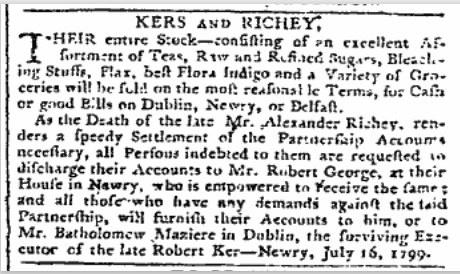